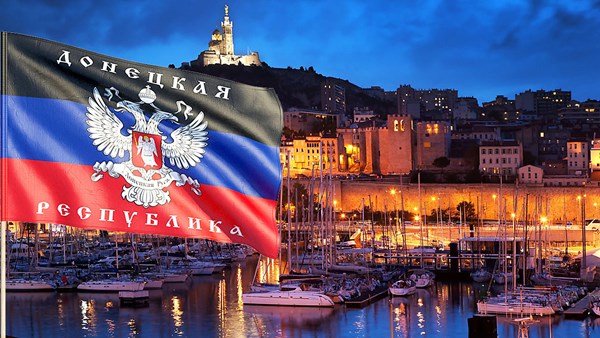 Marginal French politicians and experts financed by the Kremlin took part in the opening of a fake "representative office" of the separatist DPR (Donetsk People’s Republic) in Marseilles, as reported by the Security Service of Ukraine (SBU) on their Facebook page.
The report notes that the SBU knows well the identities of five French citizens who attended the opening ceremony of the DPR center in Marseilles.

"Huber Fayyar, the chairman of the center, together with like-minded people Christian Borelli and Christian Puyol, arrived in the DPR in the summer of 2017 through the territory of Russia. They met in Moscow with the traitor Natalia Poklonskaya. In the separatist-held Donetsk, the "delegation" signed an agreement on opening a "center" with the so-called acting Foreign Minister of the DPR, Natalia Nikonorova," the report said.

The SBU also said that the opening of the representative office was also attended by Jacques Clostermann, the president of the association "My country of France," who visited separatist-held territories back in 2016 when his union was a part of "National Front." Before the 2017 elections, this union was kicked out of the Marin Le Pen coalition.

The fifth "honorable guest" of the opening of the center was Xavier Moreau, a French analyst and military expert. “Recently, he repeatedly voiced the theses beneficial to the Kremlin's propaganda and organized public events using money from Russian Special Services," the SBU stated.

Yesterday, after a public statement by the Minister of Foreign Affairs of Ukraine, Pavlo Klimkin, about the opening of the fake "center of Donetsk People's Republic" in Marseilles, the French Foreign Ministry officially appealed to the law enforcement agencies of the country to verify the legality of the opening of the representation of the terrorist organization in France," the SBU stressed.