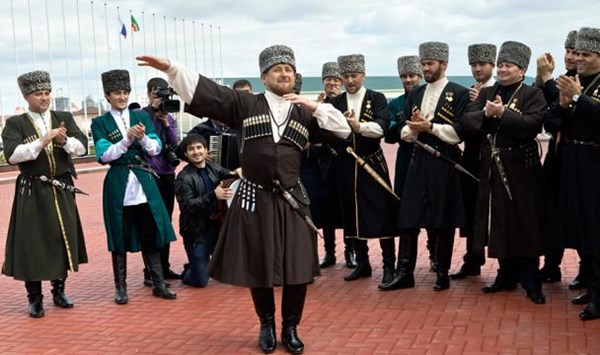 There have been reports from the Russian Republic of Chechnya that government officials, teachers and students throughout the territory are being compelled to show support for the Chairman of the Chechen Republic, Ramzan Kadyrov.

The Russian online edition Znak reported that the employees of the Ministry of National Policy, External Relations, Press and Information of Chechnya and its subordinate offices there were ordered to attend a flash mob on Thursday and rally in Grozny, the Chechen capital, on Friday.

According to the report, all managers and employees of Ministry institutions were compelled to attend the events. In a letter signed by Minister Jambulat Umarov, which Znak published, it is also stated that every second worker was to carry one of 60 approved slogans while one out of three was to carry a photo of Ramzan Kadyrov and his late father, Akhmad Kadyrov.

Russian human rights defender Igor Kalyapin, head of the Committee for the Prevention of Torture and member of the Human Rights Council under the President of Russia, also said on Facebook that all teachers and senior pupils (10th and 11th-graders) without exception are obliged to appear at the rally in Grozny on Friday. This mandatory attendance is not limited to those from the capital. Friday will be declared an official day off for them. If an employee of the Department of Education cannot be present personally, he or she must send a family member instead, the report says.

Earlier on Wednesday, Dmitry Peskov, spokesperson for the Russian President, implored "not to escalate" the situation when Chechen leader Ramzan Kadyrov stated that representatives of the Russian opposition are "traitors" and "enemies of the people" and that they "should be judged.” According to Peskov, the Chechen leader meant only those who "are outside the legitimate political field of the country." Putin's representative noted that such oppositionists "do not contribute to the stability and prosperity of the state."

It was the Kremlin's first official reaction to Kadyrov’s statement about the opposition. However, Peskov refused to comment on the threats from Chechen leadership. Peskov was addressing several members of the Russian media at the time, particularly the radio show Ekho Moskvy, the TV channel Dozhd and the agency RBC. He simply said that he is not ready to talk about it.

After Kadyrov derided Russian oppositionists, Russian human rights activists and public figures started to condemn him, demanding his resignation due to numerous cases of his disregard for Russian law. Social networks launched the "Kadyrov—The Shame of Russia" campaign. In Chechnya, where Kadyrov rules, citizens responded on his behalf, asserting that "Kadyrov is the pride of Russia."