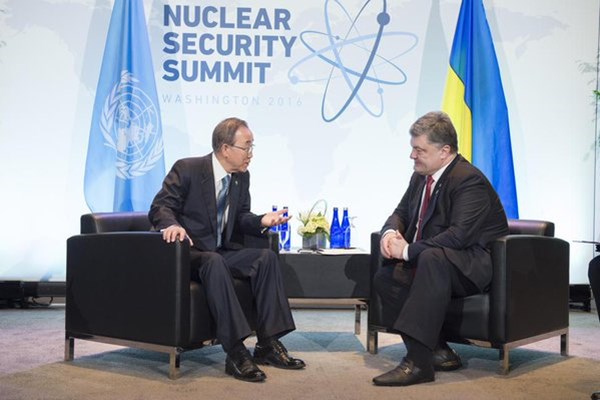 Poroshenko and Ban Ki-moon discussed the protection of human rights in the temporarily occupied territories.

During a meeting with the UN Secretary-General, Ban Ki-moon,in Washington, the President of Ukraine, Petro Poroshenko, urged to appoint a special UN Envoy to investigate the torture of forcibly detained Ukrainian citizens in Russia and the occupied territories of the Donbas, reports the Press Service of the Ukranian President.

The parties paid special attention to the protection of human rights in the temporarily occupied Ukrainian territories, as well as all illegally detained Ukrainians, including Nadiya Savchenko, in the Russian Federation. "Savchenko must be released. It is a part of the Minsk Agreements," Ban Ki-moon said.

During the meeting they discussed the necessity to activate the efforts of the international community to ensure the immediate and unconditional release of all Ukrainian political prisoners and to search for missing persons.

As it was reported earlier, Petro Poroshenko held a meeting with the Vice President of the United States, Joseph Biden, who said that the formation of a new government focused on reforms and cooperation with the IMF was needed.

Also during his visit to Washington, the President of Ukraine held a meeting with the U.S. Secretary of Commerce, Penny Pritzker.