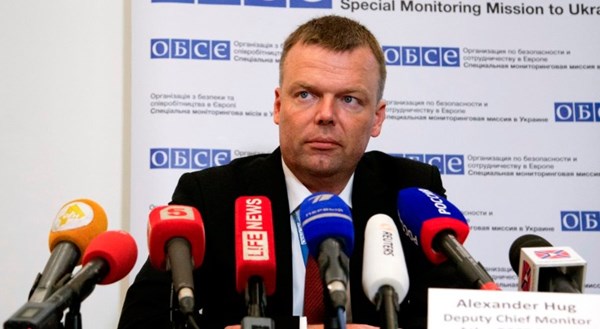 Deputy Chief Monitor of the Organization for Security and Cooperation in Europe's (OSCE) Special Monitoring Mission (SMM) to Ukraine, Alexander Hug, held a news conference in Kiev in which he outlined the general security situation in the Donbas region. Hug highlighted several areas in eastern Ukraine where tensions are rising between the Ukrainian Armed Forces and Russian-backed separatists of the so-called Donetsk People’s Republic (DPR) and the so-called Luhansk People’s Republic (LPR).

The OSCE’s Chief Deputy highlighted the city of Marinka, where monitors were recently fired upon by members of the so-called DPR. Hug, while recounting the incident, stated that “the shots fired there at our patrol tell us one important thing: somebody there does not want the SMM to see what is going on.”

Shortly after the incident, OSCE monitors were stopped by members of the so-called DPR near the city, and were not allowed to proceed to separatist-held territory. Hug stated that “aerial surveillance imagery we have access to showed a huge amount of hardware in the same area the following day. We saw 40 tanks, 115 armored vehicles, 35 artillery pieces, and 50 military type trucks,” weapons which are clear violations of the Minsk Agreements.

The Deputy Chief Monitor also mentioned that the area surrounding the city of Horlivka remains highly volatile, especially in the areas west and northwest of the city. Hug stated that the OSCE reported 43 undetermined explosions in the area in less than an hour on January 20th.

On Wednesday, in the village of Zaitseve near Horlivka, residents in government-held territory reported to OSCE monitors that the settlement had been attacked the previous evening. “Our monitors observed damage to civilian housing in the village noting the use of 82 and 120 mm mortars. These weapons are proscribed under the addendum to the Minsk package of measures,” Hug stated. The village has seen an increase in hostilities over the last two months, resulting in the deaths of two civilian residents.

Hug also noted an increase in ceasefire violations around the Donetsk Airport, as well as in the area surrounding the village of Kominternove, where the SMM has observed a buildup of hardware and soldiers from both sides.

Hug finished his briefing by reiterating that the OSCE’s ability to carry out its mission in eastern Ukraine is severely hampered by a lack of access to important investigative areas in parts of the Donbas region not controlled by the Ukrainian government. Freedom of movement for the OSCE’s monitoring mission was one of the key components of the Minsk II Agreement, which was signed by the various parties involved in the conflict including the leaders of the so-called LPR and so-called DPR.