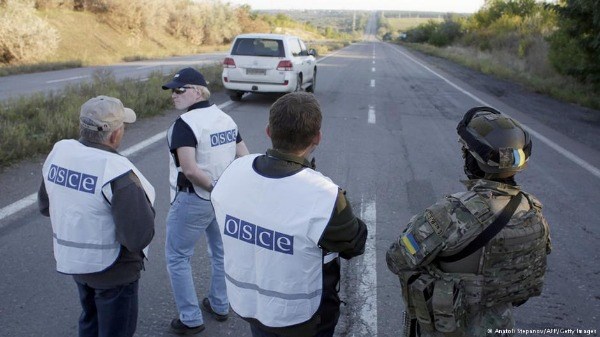 Ukrainian representatives at the Joint Centre for Control and Coordination (JCCC) reported that a sniper from the illegally armed groups opened fire on a car from the OSCE Special Monitoring Mission on the 16th of January in Marinka (in the Donetsk region). The car was fired on within the territory under control of members of the so-called Donetsk People's Republic.

“The representatives of the SMM weren’t injured. Their lives aren’t in danger but the car is damaged,” the report says.

It was noted that there has been no gas in Marinka for more than six months, and the damaged pipeline is currently being repaired. The representatives of the OSCE SMM were part of a patrol that included Ukrainian officers from the Joint Centre for Control and Coordination, emergency service engineers and soldiers from the civil-military cooperation task force ‘Donetsk.’

The main task of the joint patrol was to ensure the safety of civilian personnel while they worked on repairs.

“Ukrainian observers from the Joint Centre for Control and Coordination (JCCC) repeatedly noted that the militants carried out these attacks in order to delay the process of infrastructure repair in the territory that is under the control of the Ukrainian Government, including Marinka, and also to intimidate the OSCE observers and those making repairs,” the report says.

Ukrainians from the JCCC noted that the group coordinating the repair project is focused on the reconstruction of infrastructure in the Donbas and stressed that it is impossible to perform this work while under attack. “We must once again point out that the Russians from the JCCC are unable to ensure a full ceasefire even during the repair of power grids, water pipes and gas pipelines in the priority areas in Minsk,” the report says.

The Principal Deputy Chief Monitor of the OSCE Special Monitoring Mission to Ukraine, Alexander Hug, stated on the 14th of January that militants of the DPR (Donetsk People’s Republic) forced OSCE observers to leave their cars and lie down on the ground in Horlivka. They tied observers’ hands behind their back and forced them at gunpoint to lie face down in the snow. Then they were taken to the adjacent building again at gunpoint.