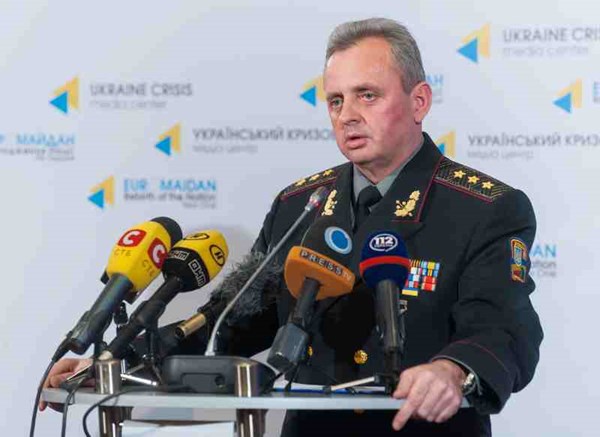 The Chief of the General Staff of the Ukrainian Armed Forces, Viktor Muzhenko associates the escalation at the demarcation line with the defeat of separatists near Avdiivka. Muzhenko reminded that Ukrainian servicemen have the right to open fire, as stated in his commentary to Ukrayinska Pravda in response to questions about the recent escalation in the ATO zone since the 29th of January.

“I think that this is all a response to the defeat that separatists experienced near Avdiivka. They panicked and were desperate. The separatists are intensify shelling in order to stabilize their psychological state. The aggression against the OSCE mission can also be explained this way,” Viktor Muzhenko said. At the same time, Muzhenko reiterated that Ukrainian divisions stationed at the demarcation line have the right to open fire in the event of any threats.

“The stance on this issue was, is, and remains unchanged. Commanders make the decision on whether to return fire,” the Chief of the General Staff stated. “The Commander of the military unit has the right to open fire from weapons available in his division’s arsenal in the event that his life or life of his subordinates is threatened – whether it is from shelling or a the threat of approaching units,” Muzhenko said.

“The same goes for the platoon commander, company commander, and battalion commander. They have mortars at their disposal but they are located in the withdrawal areas; in these situations, the senior Chief takes over the responsibility. However, he has the right to open fire from weapons that aren’t subject to withdrawal,” Viktor Muzhenko noted.

“If separatists use Grad multiple rocket launchers to fire on our positions, we have the right to give an adequate response. It isn’t necessarily to use Grads, but there are other artillery weapons. Everything depends on the means that are most efficient in neutralizing the threat posed to the lives of our fighters,” Muzhenko clarified.

The Chief of the General Staff of the Ukrainian Armed Forces noted that the officers in charge of these strikes are required to inform the Joint Centre for Control and Coordination (JCCC) if they decide to use weapons prohibited by the Minsk Agreements in response to their use by separatists.

“There is a procedure under which the brigade commander must inform Ukrainian authorities from the JCCC and, in turn, they should inform Russia and the OSCE of such attacks and the fact that we will open retaliatory fire. If there is an urgent need, the Commander uses the weapons in retaliation and concurrently reports on the use of such weapons,” Muzhenko explained. At the same time, Muzhenko emphasized that it is strictly prohibited to open chaotic and provocative fire.

In response to the question by Ukrayinska Pravda as to whether an offensive by separatists is possible, he said that it can be only provoked by Russia and can happen if Russian troops are sent to the occupied Donbas. They aren’t able to start an offensive with the number of soldiers they have now. Svitlodarsk salient and Avdiivka have demonstrated that the separatists will get an adequate response to any provocation.