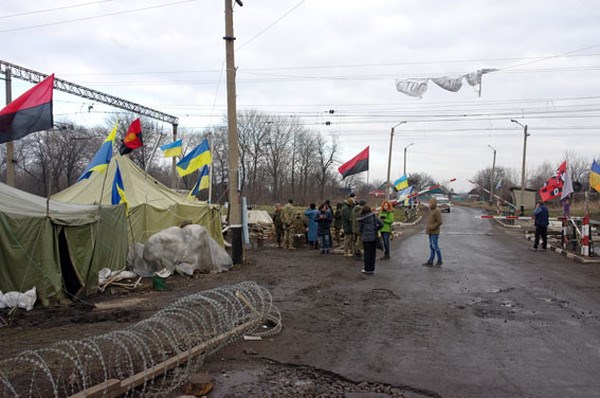 The trade blockade Headquarters redoubt at the Kryvyi Torets railway station in the Shcherbynivka locality of the Donetsk region was captured by members of the Security Service of Ukraine (SBU) and the Rapid Operational Response Unit (KORD) of the National Police on March 13. The blockade Headquarters posted about this on its Facebook page. [The blockade of the uncontrolled Donbas territories was started by war veterans in Eastern Ukraine at the end of January 2017, with the demand for Ukrainian prisoners in the Donbas to be freed, and also for trade with separatists to be ended].

“One of the volunteers reported that at first all mobile communication at the redoubt was disabled, and then unknown people came into the redoubt camp in armored vehicles,” the report states.

The blockade headquarters claims that security forces arrested several tens of activists, whom they dropped off at the police department in Toretsk. “Activists are taking measures to defend the other redoubts and to free the arrested blockaders,” the report states.

At the same time, the SBU spokesperson Olena Gitlyanska said that there were no assaults, these were “counter-sabotage actions”. The SBU states that in the territory of military action with the Donbas, 43 armed persons were detained:

“During counter-sabotage actions… members of the SBU discovered a group of people with weapons. Refusal to hand over their weapons to the police was the basis of the arrest of 43 persons”.

The Anti-terrorist Center of SBU added that law enforcement officers seized “many weapons and a significant number of Molotov cocktails” from the detainees.

Later, on Facebook, the blockade Headquarters called the assault on the blockaders’ redoubt in Kryvyi Torets provocation, and blamed the leaders of the Ministry of Internal Affairs of Ukraine and the leadership of the Donetsk police for it. The headquarters believes that law enforcement is hereby trying to force the redoubt garrisons to take up weapons for protection, and thus to gain the “moral right” to a “forceful” crackdown on the redoubt.

After the assault, the Samopomich party made a statement in which it demanded that all arrested blockade activists be released. Samopomich also insists on the dismissal of Arsen Avakov, head of the Ministry of Internal Affairs, and Vitaly Malikov, director of the SBU Anti-terrorist Center. The party has called the crackdown on the redoubt and the arrest of activists “a return to the worst practices of Yanukovych’s entourage”.

Following the forceful crackdown on the redoubt, around 50 activists in Lutsk “captured the regional state administration building”, 24tv.ua news channel reported. The activists demanded that the blockaders be released, and also that Vyacheslav Abroskin, chief of police in the Donetsk region, be fired, and also – that the regional authorities express official support for the blockade. Eventually even regional governor Volodimir Gunchik went out to the protesters. According to him, he is opposed to the blockade, although he does not support the forceful crackdown on the blockade either.

After the time that the activist allocated to negotiating with the city administration passed, they took the main hall in the building under their control. At the same time Gunchik promised that nobody would be arrested. The activists refused to leave the building until all their demands were met.