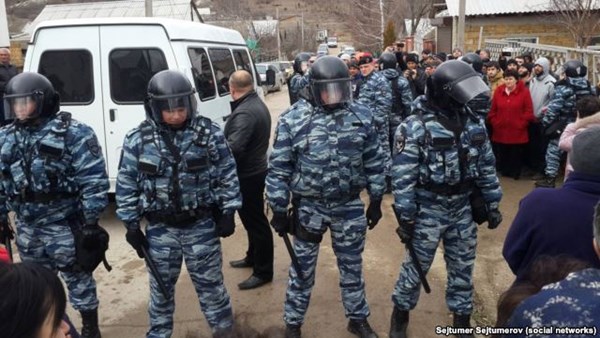 On the 11th of February, representatives of the Russian Federal Security Bureau (FSB), accompanied by Special Forces, stormed the houses of Crimean Tatars who adhere to the canons of Islam.  There were 11 cases of houses being searched on that day, and 12 people were detained.  Searches were performed in Yalta, Alushta and Bakhchysarai.

The searches involved smashing windows and placing bags over the heads of suspected terrorists and traitors.  At 6 am, Russian Security servicemen entered the house of Bakhtiar Topuzov in Yalta.  The servicemen broke windows and allegedly scared the children in the house.  The search took three and a half hours.  Thereafter, Topuzov was taken to the Main Department of the Federal Security Bureau in Simferopol.

“Relatives have said that these searches had been done unexpectedly and in a harsh manner.  Nobody had explained anything during the process.  The actions of these servicemen included twisting people’s hands behind their backs, forcing them to lie face down, putting handcuffs on them and so on,” this was stated by a lawyer, Emil Kurbedinov.

Kurbedinov believes that this another attempt by the occupation authorities of the Crimean peninsula to make radicals and terrorists out of Crimean Tatars.  “According to relatives, they are accused of terrorism.  Some of them even spoke of treason,” Kurbedinov noted.

The Crimean Contact Group on Human Rights reported that a local activist, Emir-Usein Kuku, and an alleged Slav-Muslim, Vadim Siruk, were detained in Yalta.  Muslum Aliyev, according to his wife, was taken from Upper Kutuzovka to the detention center.  In the village of Krasnokamianka, searches were performed in the houses of Anvar Bakirov and Shamil Ilyasov.  In Bakhchysarai, a search was performed in the house of Rustem Osmanov.

In the village of Holmovka (Bakhchysarai district), searches were performed in the houses of Nariman Mamediminov, Mamed Eminov and Arsen Khalilov. Thereafter, all of them were taken for questioning to the FSB.  In the village of Victorovka (Bakhchysarai district), a search was performed in the house of the Moskovskyh family. According to public activist, Zaire Smedlyaev, Russian Security servicemen also detained two men from this house.

“When people went to Holmovka, they saw the police on their way.  There were two men with bags over their heads, their hands were handcuffed behind their backs.  Police officers and the Berkut Special Forces unit were standing near them.  Based on their clothing and signs, they looked like the father and son of Moscovskyh family,” Smedlyaev said.

According to the Crimean Contact Group on Human Rights, four detainees were released, while the fate of others remains unknown. According to official data of the Russian Prosecutor General of the Republic of Crimea, Natalia Poklonskaya, the FSB initiated a case for terrorist activities in Crimea by the Hizb ut-Tahrir organization.  They detained four allegedly active participants of this organization.

Commenting on information about mass searches in the houses of Crimean Tatars, Poklonskaya stated that they are not Crimean Tatars but members of a terrorist organization.  “We don’t differentiate on the basis of nationality,” Crimea Inform quoted her as saying.  In addition, the first Deputy Chairman of Mejlis, Nariman Jalal, was summoned to a prosecutor’s office in Simferopol for questioning on the 11th of February.

Jamal said that officials were interested in the activities of Mejlis on the peninsula and the plans of organization. In his interview with Krim Reallii, Jalal stated that he is outraged by the mass searches in Crimea and the statements made about the involvement of Crimean Tatars in extremist groups.

“Mr Smirnov, Mr Balbec and other unsympathetic figures see a fighter and a so-called Islamic State terrorist around every corner.  I have always said, and I will continue to say, that there were no terrorist acts and terrorists in Crimea until Russia appeared on the peninsula.  Also, why only now are they searching here?” Jalal concluded.

After the annexation of Crimea by Russia, searches, with the participation of Russian Special Services, are frequently performed in the houses of Crimean Tatars and pro-Ukrainian activists.  International human rights organizations, the Mejlis of the Crimean Tatar People and Crimean activists regularly state this in their reports.