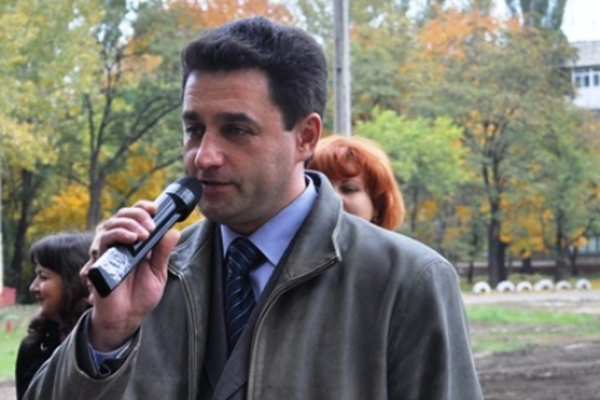 Eduard Matyukha, an employee of Ukraine’s Chief Intelligence Directorate, has returned to Kyiv after operating in the Donbas for more than five years.

At one point, he was even the “people’s mayor” of Horlivka which is controlled by pro-Russian militants, and he later held senior positions in the Communist Party of the self-proclaimed Donetsk People’s Republic (DPR), TSN reports.

Matyukha said that he spent five years in Horlivka without his family. His wife knew nothing about her husband’s mission, and moved to Kyiv deeply wounded that her Eduard was working for the pro-Russian separatists.

In May 2014, Eduard Matyuhka was elected acting mayor in Horlivka. However, his leadership of the city was extremely brief, since a conflict broke out between the separatists. “Of course, this was his first major task from the Chief Intelligence Directorate,’ the story states.

“The mayorship caused a conflict between Bezler (DPR military commander) and other groups, which resulted in Strelkov (former DPR minister of Defense) leaving for the city of Donetsk. This artificially created conflict enabled the conflicts between the groups in the cities of Slovyansk, Donetsk and Horlivka,” Matyukh recounts.

He later became first secretary of the local Communist Party committee, and in this capacity began to establish contact with communists in Moscow – Gennady Zyuganov and his party. In this way, the Ukrainian agent discovered the true role played by Russia’s Communist Party in the establishment of the new Russian empire.

“Zyuganov’s party has become the Kremlin’s platform for all pro-Russian enclaves in other countries. Abkhazia, Transnistria, North Ossetia, the fake Donetsk and Luhansk People’s Republics – they are all coordinated by the Kremlin through communists. A person responsible has been appointed – Russian State Duma member Taysaev Kazbek Kuchukovich,” TSN reports.

With Taysaev and other Russian communists, Eduard coordinated so-called humanitarian convoys, and in this way discovered that one of their functions was to send cash to the militants.

According to representatives of Ukraine’s Defense Ministry, it was thanks to Matyukha’s efforts that Kyiv learned of Moscow’s plans to use other units of its Southern Military District against Ukraine.