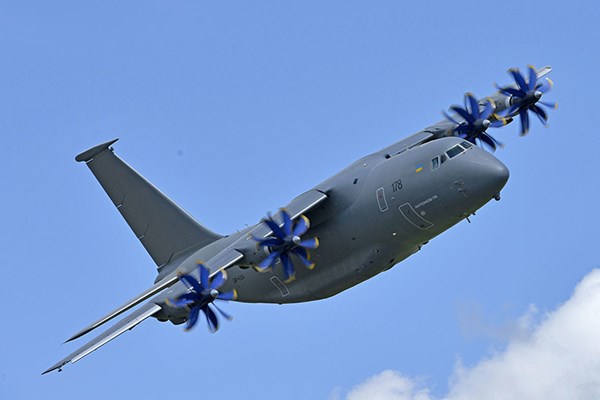 The Antonov aviation design and aircraft manufacturing company headquartered in Kyiv and part of the Ukrainian Ukroboronprom state-run defense industrial enterprise, intends to upgrade its An-70 military transport aircraft.

The press service of Ukroboronprom stated that the company intended to attract aviation companies from Saudi Arabia, the United Arab Emirates, and Turkey to help implement the required changes.

As part of the enhancements, the An-70 will receive new aviation electronics and will eliminate Russian-manufactured parts, becoming the second aircraft in the country after the An-132 to not have any parts supplied from its neighbor.

In 2016, the First Deputy President of the Antonov aviation company, Oleksandr Kotsiuba, in an interview with Liga.net, admitted that the An-70 is approximately 50% is reliant on Russian spare parts. “For example, propfan engine propellers for the An-70 are produced only in Stupino, Russia. This is a unique mechanism, vital to An-70’s operability in its current design. We have an option either to produce the exact propellers or to install a new engine,” Kotsiuba said.

The An-70 is one of latest aircraft models designed by the Antonov aviation company. The project started back in early 1990’s, and the last tests just ended in the spring of 2014. The aircraft has a cruise speed of up to 780 km/h, a flight range of up to 7,800 km, and is able to land on a 600-800m grass strip. The aircraft has short take-off and landing configurations and impressive weight-lift characteristics allowing it to carry up to 300 airborne troops or 47 tons of cargo.

The price for the An-70 is $67 million USD. Until now, there have been only two test An-70s produced.

The An-70 is the main competitor to the Russian Il-476 aircraft and the French Airbus A400M aircraft.