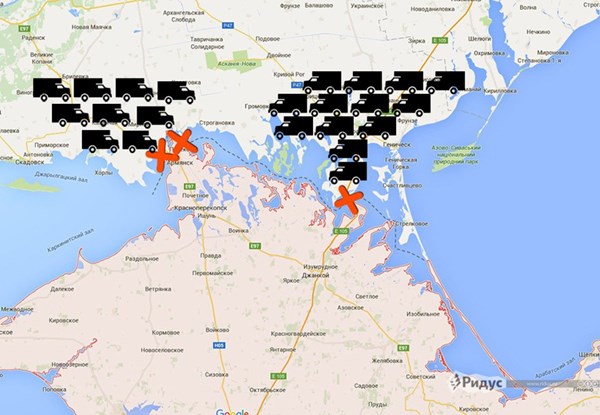 Ukrainian Prime Minister, Arseniy Yatsenyuk, stated that the turnover of goods and services between Crimea and Ukraine will completely cease within 30 days. Yatsenyuk stated that Ukrainian law prohibits the exchange of jobs, goods, and services between temporarily occupied Crimea and the other territories of Ukraine. Humanitarian aid and personal belongings of Ukrainian citizens are the only exceptions to this law.

Prime Minister Yatsenyuk disclosed this information to the Ukrainian public, noting that the new laws will begin to be enforced in 30 days. He additionally stated that electric supply will not be restored to the Crimean peninsula without order from Ukraine's Council of National Security and Defence.

President Poroshenko noted the escalations between civil social activists and the occupying authorities of Crimea. He cited the several criminal actions taken against the groups initiating the aforementioned Crimean trade embargo. This campaign demanding the complete cease of trade relations with the peninsula began on September 20, 2015.

This same day marked the State authorities' temporary ban of flows between Ukraine and the Autonomous Republic of Crimea. Yatsenyuk instructed for the preparation of a draft regulation specifically listing the goods, works and services that will be allowed to be supplied to Crimea.

Furthermore, Yatseniuk put emphasis on the involvement of the Mejlis of the Crimean Tatar People. He stated that "the list of goods allowed and disallowed must serve both parties - both Ukraine and their brotherly Crimean Tatar people."

On September 20, the Mejlis of the Crimean Tatar people began an electricity blockade of occupied Crimea. On the night of November 22, Crimea was disconnected from Ukrainian power system after the power line support towers in Kherson region were blown up. On December 6, the Mejils activists allowed the resuming of power supply via the Kakhovka-Titan line.

Chairman of the Mejlis of the Crimean Tatar people, Refat Chubarov, stated that the decision to ease this power blockade was made post cosultation and agreement with Ukrainian President Poroshenko. Chubarov expressed that he hopes this gesture leads to the release of the Crimean Tatar activists that have been arrested in the peninsula. Chubarov warned that if the requirements of the blockade organizers are not met by late December, the power supply will be cut once again.