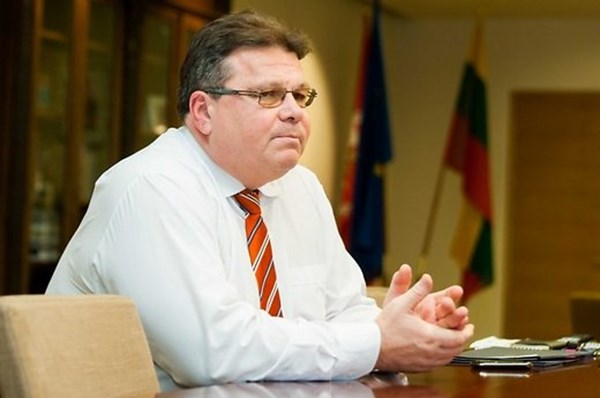 The Minister of Foreign Affairs of Lithuania, Linas Linkevičius, commented on statements given by French politicians regarding the possible dangers of ongoing sanctions, saying that they not only affect the country’s economy, but the European Union (EU) as a whole.

Linkevičius noted that "no one is proud of the sanctions, but they were introduced for a reason".

In an interview with Radio French International (RFI), Linkevičius stated that Russia’s annexation of Crimea was the reason for the sanctions.  Even though Crimea will remain a part of the Russian Federation, there is no reason to lift these sanctions.

“The sanctions should continue.  There is a list of individuals against whom sanctions were imposed.  These sanctions were introduced as there had been a violation of the territorial integrity of Ukraine.  As for the economic sanctions, which we will review in summer, they are directly related to the implementation of the Minsk Agreements.  We must remember that these agreements are then directly related to the security situation.  However, we have not been adhering to these agreements.  These sanctions were imposed for certain reasons.  If the issues relating to these reasons have not yet been resolved, there is no reason to lift the sanctions.  Even the parties calling for the lifting of these sanctions have stated that it should only be done once all of the Minsk Agreements are implemented.  That is not happening at the moment,” Linkevičius explained.

With regard to the conflict situation in eastern Ukraine, Linkevičius said that “there is still a concentration of heavy weapons on the boundary lines and within its territories.  There are also Russian soldiers within this area.”

“It is very difficult to accept that the safety situation in this region is normal.  Also, it is very difficult to discuss elections in the Donetsk and Lugansk regions as there is no presence of any Ukrainian authorities.  In addition, there is a lack of mass media.  Russia has stated that Ukraine must fulfill their promises, but yet Russia still remains aloof and does not even recognize the fact that they are a part of the conflict.  Based on this, I do not see any progress.  Lifting the sanctions would mean abandoning the only leverage we currently have,” Linkevičius continued.

According to the diplomat, the European policy should not “give up” now “as it had done in 2008 after the war in the South Caucasus".

“We know that initially there were specific requirements and good intentions.  However, these all vanished in two or three months, and everything was back to how it was before.  If we repeat these mistakes now, we should not be surprised when we are once again faced with conflict crises in the South Caucasus, Ossetia or Transnistria.  On the one hand, we cannot blame ourselves that someone has annexed neighboring states.  However, on the other hand, we should blame ourselves as we have the opportunity to influence but we do not use it,” Linkevičius stated.

In his opinion, Ukraine must do more to fight corruption, as well as do more to implement reforms.

“In this conflict, let us not forget who is the aggressor and who is the victim.  In my opinion, the mistake that we sometimes make is that we compare responsibilities and not share them.  I repeat that we do not wish to remove those obligations that must be fulfilled by Ukraine.  The government understands how difficult it is.  However, all primary responsibility rests with those who had started it all.  The situation has worsened and continues to do so,” Linkevičius concluded.