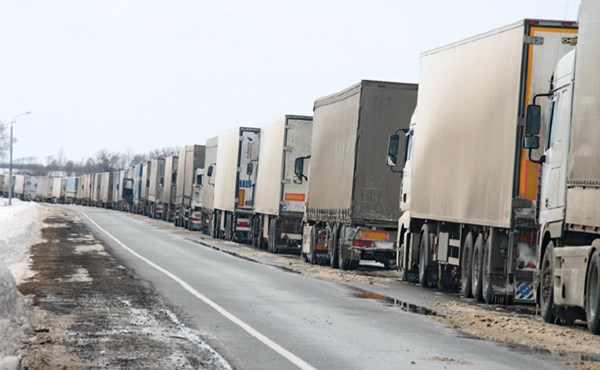 The Ministry of Transport of the Russian Federation has stopped the movement of registered Ukrainian freight transport on Russian territory.  According to their statement, this measure was introduced in response to the unlawful blocking of Russian vehicles on Ukrainian territory.  This ban will remain in effect until the situation is resolved in Ukraine.

The Ministry believes that this blocking of trucks violates an agreement between the Ukrainian and Russian governments with regard to international road traffic.  As per this agreement, the parties are obliged to ensure the possibility of the implementation of transport shipments on its territories.  Russia has refused to comment on the compliance of Russian restrictions on the transit of Ukrainian transport with regard to this agreement.  The current blockings in Ukraine were a response to these restrictions.

According to the Ministry, more than 100 Russian trucks remain blocked in different regions of Ukraine.  In addition, more than 500 trucks cannot enter Ukraine from European Union (EU) member states.  On the 11th of February, there was a social movement in response to blocking the transit of Russian goods through Ukraine as a result of Russia’s actions.  This movement began in Ukraine, but has now spread to a number of other regions.

Activists have called on Ukrainian authorities to officially ban such transits.  Since the beginning of January 2016, Russia has announced the introduction of significant restrictions for transit of Ukrainian goods through Russian territory to Kazakhstan.  This, in practice, resulted in the nearly full blocking of Ukrainian transit through the territory of Russia.

Transit is now only possible through the territories of Belarus, and through certain border crossings on the condition that the shipments be tracked with the aid of the Russian Global Navigation Satellite System (GLONASS).