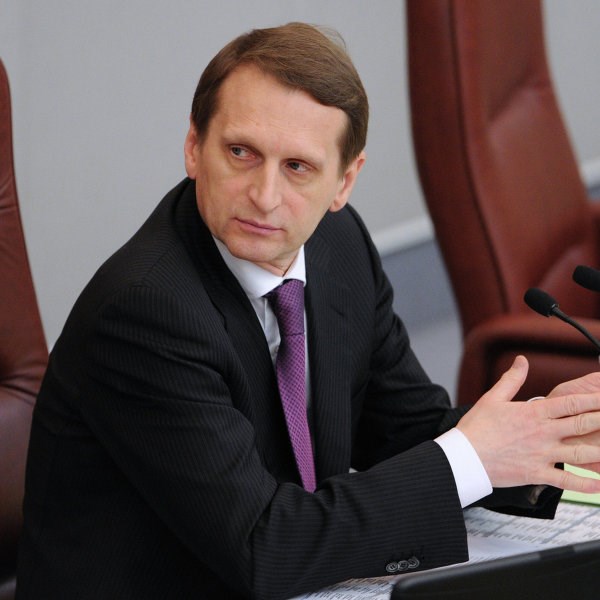 The Speaker of the Russian State Duma, Sergey Naryshkin, invited the leading European countries to punish Kiev for their failure to comply with the Minsk Agreements, as reported by the Russian media on Tuesday, January 19th.

At the opening of the spring session of the State Duma, Naryshkin stated that "the position of France and Germany, presiding over the OSCE this year, will become completely constructive and objective.  The advocates of extending anti-Russian sanctions will realize that following their own logic the sanctions should not be imposed on Russia but on Kiev’s government for egregious violations of the essence of the Minsk Agreements."

The Chairman's statement was made in response to the increasing tensions in eastern Ukraine. Interfax reported on Tuesday that Ukrainian military positions in the Donbas region were fired on by separatists 47 times in recent days.  Moreover, there are attacks from small arms, mortars, grenade launchers and armored vehicles.

The Director of the Centre for Eastern Studies, Andrei Okara, thinks that the Naryshkin's words were directed toward both domestic and international audiences.

"His argument is intended to convince the Russian society that Kiev continues to cheat all, without exception, and that the ‘Kiev junta’ is playing a game and does not intend to follow the Minsk Agreements," he stressed in an interview with Voice of America.

According to the analyst, the main goal of Russian propaganda is to convince the international community and, above all, their own people that Russia is not the aggressor, but the peacemaker.  "Therefore, Naryshkin’s speech fits very well into the idea that the aggressor is not Russia, but Ukraine.  And that Russia is defending the civilian population of the Donbas region from Nazis, fascists and bandits," he explained.

In turn, the head of the Laboratory of Historical Studies of the State University Higher School of Economics, Professor Leonid Vasilyev, believes that the Russian leadership is busy finding a way out of an extremely difficult situation.

Vasilyev’s comment to the Russian broadcast of Voice of America was that "Now Moscow is trying to change the situation, to find a way to solve the problem.  The solution is hardly visible.  And the Minsk Agreements really prevents them from doing this, as it requires concessions from Moscow regarding the border and military issues.  But these concessions create the risk that the Kremlin may lose everything that was won before.  Thus these actions cause great unfairness to the policies and the evaluation of our leadership."

However, the Professor expressed doubt that the statement of Naryshkin is a major component.  "It's hard to understand what he exactly wants.  Does he want to write new Minsk Agreements to replace the old ones?  Hardly anyone would go for it."

According to Vasiliev, the situation now looks like an attempt to insert into the system of international relations "entirely new and apparently frivolous principles... As far as I know, there has been nothing like this in history," he said.

Meanwhile, starting January 23th, the Assessment Mission of the UN will start its work to stabilize the situation in the Donbas region as reported by the Permanent Mission of Ukraine to the UN on its website.

Previously there were negotiations regarding Ukraine’s request to organize a trip for the group of the permanent representatives of the Member Countries of the UN Security Council to the Donbas region.  The purpose of this trip was to convince them to deploy a peacekeeping operation in the region.