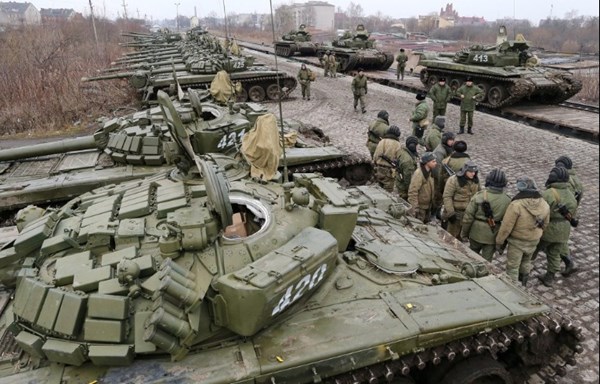 Many experts believe that this week’s announcement that Russia will station three new divisions along the western border is one step closer to a new Cold War. Russian Defense Minister Sergei Shoigu stated that the strengthening of the country’s western flank is “the most important task” for the Russian army in the coming year. The announcement is a chain in a series of events that is reminiscent of what many hoped would be a bygone era.

The build up of military formations on both sides of the border is a result of the deterioration of relations between NATO and Russia that was brought about by the crisis in Ukraine.  Russia’s annexation of the Crimea in early 2014 and its subsequent support of separatists in the so-called Donetsk People’s Republic and Luhansk People’s Republic in eastern Ukraine have led many Eastern European countries to seek to strengthen their territorial defense, which often times includes calling on NATO to station troops along Europe’s eastern border.

As reported by Deutsche Welle, in November the three Baltic States along with six other Eastern European countries agreed on the need to establish a “powerful, convincing, and sustained” military presence along Europe’s border with Russia to defend against Russia’s “aggressive behavior”. NATO Secretary General Jens Soltenberg told Deutsche Welle in July of last year that "All that we do is defense. We protect our allies, and Russia will use force to change borders and destabilize Ukraine".

At the end of 2015, Russian President Vladimir Putin signed a decree approving a new national security strategy, stating that NATO’s expansion and the organization's approach to Europe’s eastern borders is a primary threat to Russia’s national security. The document, posted by TASS, states "The buildup of the military potential of the North Atlantic Treaty Organization (NATO) and vesting it with global functions implemented in violations of norms of international law, boosting military activity of the bloc’s countries, further expansion of the alliance, the approach of its military infrastructure to Russian borders create a threat to the national security."

It is now known that Russia’s new national security strategy involves stationing thousands of Russian troops along the western frontiers of the country. According to Vedomosti, two of the three new divisions will be stationed along Russia’s border with Ukraine, one near the city of Boguchar (45 kilometers from Luhansk in Ukraine) and the other in the town of Valuiki (20 kilometers from Luhansk). The former is to be home to more than 5,000 Russian troops and 1,300 pieces of military equipment. The bases will be permanent structures meant to replace the makeshift bases that have sprung up in the Rostov-on-Don region since the beginning of the Ukrainian conflict in 2014. It is widely believed that Russia uses these bases to funnel soldiers and military equipment to eastern Ukraine.

Tensions between Russia and NATO have been further heightened following the downing of a Russian Su-24 bomber by a Turkish F-16 fighter over the Syrian-Turkish border in November of last year. Last month Russia and Armenia announced the creation of a joint regional air defense system on Armenian territory, which shares a 268 kilometer border with Turkey, a member of NATO.

In the fall of 2015, many were optimistic that the decrease in the level of violence in eastern Ukraine would lead to peace in the region and consequently a normalization of relations between the Russia and the West. The resumption of hostilities in the Donbas region, however, has dashed those hopes, at least for the time being. While some analysts have dubbed the current situation a “Second Cold War”, the relationship between Russia and the West is a far cry from the decades-long Cold War, and though relations are slowly moving in that direction, it is not irreversible.