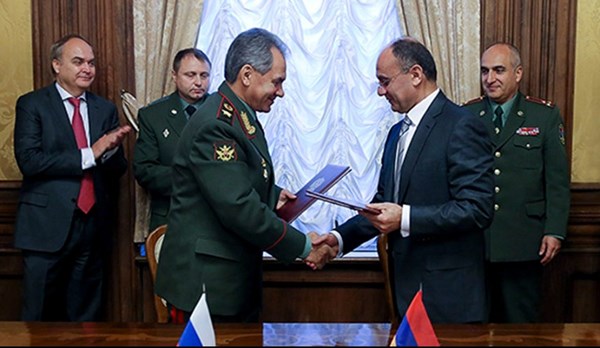 “During the talks, we discussed a broad range of issues of cooperation in the military and military-technical spheres. The plans of bilateral cooperation of the defense ministries were signed for the next year,” Shoigu stated.

Armenia is home to two Russian military bases and 4,000-5,000 Russian servicemen. Recently, the Erebundi Airbase received a new batch of combat Mi-24P and transport Mi-8M helicopters. The new agreement is sure to expand Russia’s military presence in the former Soviet Republic in 2016.

Sputnik quoted the former Deputy Undersecretary of Russian Air Defense Forces, Alexander Luzan, as saying “we have a military base in Armenia. We… need to protect that base from other countries’ aircrafts.”

As Armenia and Turkey share a 268 kilometer (167 mile) border, many believe that Russia’s increase in security in the former Soviet Republic is a direct response to Turkey’s downing of a Russian Su-24 bomber along the Turkish-Syrian border on November 24th which has led to a souring of relations between Moscow and Ankara. “Today, aviation plays the most important role in the military. Turkey is a member of NATO and there are not only Turkish aircrafts inside Turkish territories; the United States also uses air bases [in Turkey]. There is a need for a more serious system that will strengthen [our] air space and for this aim, the unifying of forces is needed,” Luzan explained.

Turkish media have taken the view that the agreement is a retaliation against Turkey for the downing of the Su-24, claiming that the Russian government is attempting to “heat up the Caucasus.”

The bilateral agreement comes shortly after Russia delivered its S-300 air defense system to the government of Kazakhstan, free of charge.

Moscow’s agreement with Yerevan is one of several cooperation plans between Russia and other CIS countries, including Belarus and Kazakhstan. Negotiations are ongoing with Kyrgyzstan and Tajikistan.