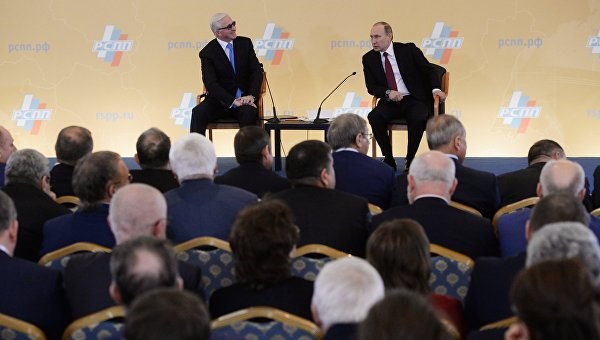 On Thursday, Russian President Vladimir Putin visited the congress of the Russian Union of Industrialists and Entrepreneurs (RSPP), and later held a meeting with major businessmen behind closed doors. During the public part of the meeting, Putin praised the business leaders for their "mature and responsible" work, and assured them that the government is working on reducing the fiscal burden brought on by the economic crisis. The Russian President also said that he supports “easing the law” for the entrepreneurs. During the private part of the meeting, the President spoke mostly about geopolitics, participants of the meeting told to the RBC.

During the private part of the meeting, the issue of the fate of the Russian business assets in Ukraine was raised. One of the businessmen asked the President whether they should sell Ukrainian assets now, given Moscow's and Kiev's difficult relationship. In response, Putin said that, “while there is hope for the normalization of relations, we should wait."

"Everyone has to decide for themselves, according to the situation," the source told RBC. "He [Putin] also said that there [in Ukraine] in the financial and banking sector the pressure could be felt and it's one situation, but in the industrial assets area the situation could be different. Nevertheless, his assessment was: ‘We can still wait some more to see how the events will develop’," the participant of the meeting said.

According to another attendee, Putin did not recommend that Russian business men sell Ukrainian assets. The President made it clear that though the authorities in Kiev may be replaced, business will remain.
Another participant of the meeting interpreted President's words as: "Everyone should decide for themselves."

According to the Bank of Russia, as of October 1st, 2015, direct Russian investment in the Ukrainian economy amounted to $ 2.17 billion; $1.48 billion in shares companies and $691 million in debt.

Russian enterprises still have major assets in Ukraine. The state owned Rosneft owns the Lisichansk refinery in the Luhansk region, as well as 141 gas stations. In January of 2016, Ukrainian media reported that Rosneft was going to sell gas stations to Swiss Glusco Energy, but the deal hasn't been made yet. Lukoil sold a chain of 238 gas stations in August of 2014, but the company still owns the Ukrainian petrochemical company Karpatneftekhim.

VimpelCom, controlled by Mikhail Fridman and his partners from LetterOne, owns the largest Ukrainian mobile operator, Kyivstar. The second largest operator, MTS Ukraine, is owned by the MTS group.

In the banking sector there is Sberbank, and the Ukrainian subsidiary banks of VTB and Alfa-Bank, as well as the subsidiary bank of Vnesheconombank: Prominvestbank.

There are also smaller investments. For example, A1 Investment Company owns 24% of the oil and gas company Regal Petroleum, and the Moscow Proxima Capital Group owns 20% of JKX Oil & Gas, which is associated with the Ukrainian oligarch Igor Kolomoisky.

In addition, one of the participants of the meeting recounted that Putin talked about the relationship with the United States. The President said that, in his opinion, a further deterioration of the relationship should not be expected, and gradually relations with the United States will improve. According to RBC, Putin spoke about the weakening of Petro Poroshenko's position in regard to the Minsk Agreements, with which the Ukrainian President cannot fully comply. At the same time, according to the source, Putin didn't provide a time table for the normalizations of relations with the United States. He also didn’t mention when the sanctions would be lifted.

Businessmen were also interested in Russia's actions in Syria. Putin, according to the participants of the meeting, reiterated that Russia has decided to cease its military operation in Syria, because "the situation there has stabilized."

The closed meeting was attended by members of the board of the RSPP, including Petr Aven, Alexei Mordashov, Sergei Galitsky, Mikhail Fridman, Vladimir Yevtushenko, Andrei Melnichenko, Vladimir Potanin, Andrei Kostin, Dmitry Pumpyansky, Anatoly Chubais, Vladimir Lisin, Viktor Vekselberg and other business leaders. Among the officials who participated in the meeting were Assistant to the President, Andrei Belousov, the head of the Central Bank of Russia, Elvira Nabiullina, and Finance Minister, Anton Siluanov, and Minister of Economic Development, Alexei Ulyukayev.

After the meeting with the businessmen, Vladimir Putin met with US Secretary of State, John Kerry, who arrived in Moscow on Wednesday.