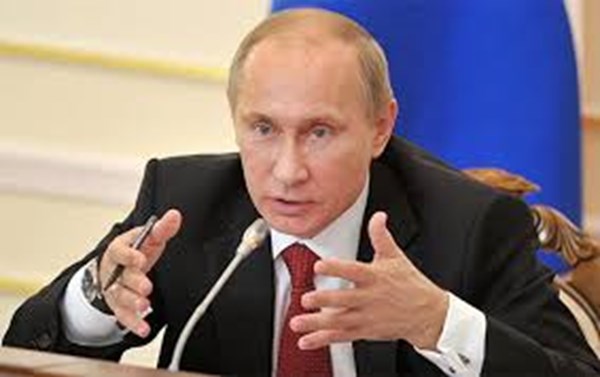 Commenting on Ukraine’s alleged involvement in a terrorist attack in the Crimea that was reportedly thwarted by the FSB, Russian President Vladimir Putin said that he does not see the point of holding a meeting of the Normandy Four, Deutsche Welle reported.

Putin accused Ukraine of "transitioning to terror" instead of dealing with conflict issues at the negotiating table.

"There are losses from the Russian side, two soldiers were killed. We certainly will not ignore such things. I would like to appeal to our American and European partners. I think it is obvious to everyone that the current authorities in Kiev are not looking for ways to solve problems with the help of talks, but are transitioning to terror. This is a very disturbing thing," Putin said on Wednesday.

At a press conference following talks with Armenian President Serzh Sargsyan, the Russian leader called the FSB report "very disturbing information," and said that because of these events he sees no point in holding Normandy Four meetings.

Ukraine’s Ambassador to the Council of Europe, Dmitry Kuleba, wrote on Twitter that "Putin wants more war. Russia builds up the tension, persistently seeks a pretext for the war with Ukraine, tests the reaction of the West.”

In turn, Vice-Speaker of the Crimean parliament Remzi Ilyasov, said that the appearance of Ukrainian saboteurs in the Crimea should be regarded as a tacit declaration of war. "All this is an act of aggression, and considering that behind this attempt of the sabotage, the attempt of the state terrorism is the Ministry of Defense of Ukraine, it could be considered, in fact, as a declaration of war," RIA Novosti quotes Ilyasov as saying. He added that Russia reserves the right to respond in accordance with its national military doctrine.

On Wednesday, the FSB claimed it had thwarted a terrorist attack in the Crimea on August 7th. The Russian Security Service accused Ukrainian military intelligence of plotting the attack, saying it had attempted to carry out an attack against “critical elements of infrastructure and life of the peninsula” in order to “destabilize the socio-political situation in the region” on the eve of the elections.

The FSB reported that one of its agents was killed in a raid on a premises where homemade bombs, guns, ammunition, mines, and grenades were found.

Ukraine has denied the accusations. "This is a false information," a representative of Ukraine’s Main Directorate of Intelligence of the Ministry of Defense said in an interview with Reuters.

Secretary of the National Security and Defense Council of Ukraine (NSDC) Olexandr Turchynov described the statement by Moscow as another element of the hybrid war and an attempt to exacerbate the situation in the Crimea.

"Hysterical and false statement of the Federal Security Service has no grounds, except to attempt to escalate and aggravate the situation on the Ukrainian temporarily occupied territories by the occupants," the press service of the NSDC quoted Turchynov as saying.