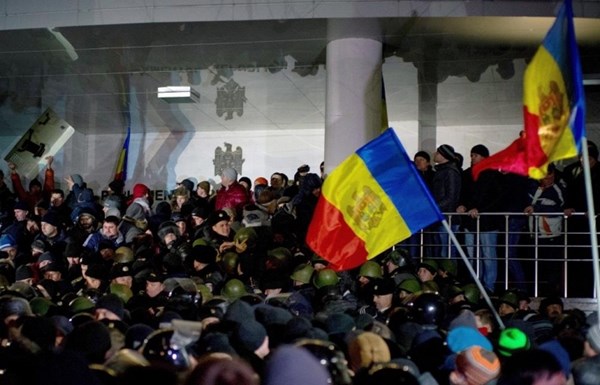 In Moldova, supporters of the opposition parties gathered in protest at the Parliament building in Chisinau on January 20th after lawmakers voted to approve a new government headed by a new pro-European Prime Minister, Pavel Filip. According to some reports, protesters also attempted to break into the Parliament building.

On Wednesday, the Moldovan Parliament approved a new pro-European government, ending a political crisis that lasted months. 57 out of 101 deputies voted for a government headed by a member of the ruling Democratic Party of Moldova, Pavel Filip. The 49-year-old Filip has been the Minister of Communications since 2011.

The vote in Parliament was held with reinforced security measures around the Parliament building in Chisinau and a police cordon. The demonstrators rallied outside, demanding early Parliamentary elections instead of the creation of a new government with the current members of Parliament.

The demonstrators were mostly organized by pro-Russian opposition groups. Some protestors belonged to pro-European forces who believe that the new government, composed of representatives of the same parties as the previous one, will not be able to put an end to the corruption that was inherent in the previous governments of Moldova.

Moldova had been in a state of political crisis since the end of October 2015, when Parliament expressed its distrust of the previous pro-European government in the face of a year-long corruption scandal and mass protests fanned by the pro-Russian political party “Our Party”.