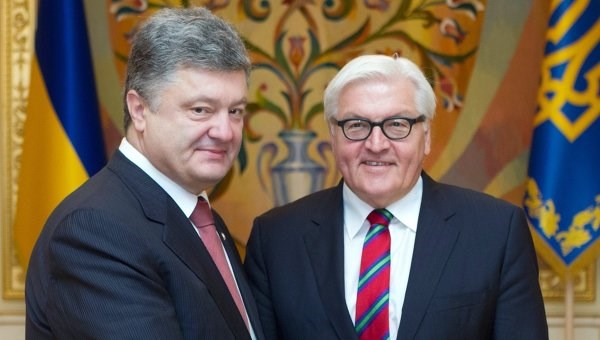 The President of Ukraine, Petro Poroshenko, called Frank-Walter Steinmeier a "great friend of Ukraine" in a statement honoring his election as President of Germany, as Poroshenko wrote on Twitter.

"I cordially congratulate Frank-Walter Steinmeier, the great friend of Ukraine, on his election as the Federal President of Germany. I hope for the continuation of a friendly and fruitful cooperation for the sake of the prosperity of a united Europe – democratic and free," Poroshenko wrote.

The Prime Minister of Ukraine, Volodymyr Groysman, also expressed his congratulations to the newly elected president of Germany. "The Ukrainian people value Germany's support and look forward to cooperating with the newly elected President," Groysman wrote on his Facebook page.

The 61-year-old Social Democrat and former German Minister for Foreign Affairs, Frank-Walter Steinmeier was elected as German president via a secret ballot with the participation of 1,260 members of the Federal Assembly on February 12th. Steinmeier will replace incumbent President, Joachim Gauck, who will soon retire after a 5-year presidential term.

In Germany, a president has very limited powers and basically performs politically neutral functions. It is the Chancellor who possesses actual authority.

Serving as the Minister of Foreign Affairs of Germany, Frank-Walter Steinmeier took an active part in the Normandy format meetings to resolve the situation in eastern Ukraine.