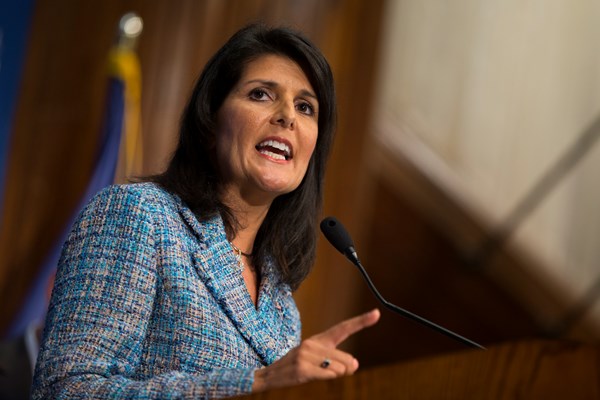 The present U.S. administration is still deliberating the possibility of strengthening cooperation with Russia, however it considers it unacceptable to do so at the expense of satisfying Russia’s geopolitical interests and aggression against other countries, especially Ukraine, as stated on Tuesday at a meeting of the UN Security Council on Conflicts in Europe by Nikki Haley, the U.S. permanent representative to the organization.

"The United States thinks it's possible to have a better relationship with Russia – after all, we confront many of the same threats. But greater cooperation with Russia cannot come at the expense of the security of our European friends and allies," the U.S. Ambassador said.

That is why, she said, the United States calls on Russia to respect the sovereignty and territorial integrity of Ukraine, to demonstrate its commitment to peace through a full implementation of their obligations under the Minsk Agreements and to put an end to its occupation of the Crimea.

Nikki Haley stressed that Russia has armed and financed the separatists in eastern Ukraine. "The scenes of destruction from the town of Avdiivka in recent weeks show the consequences of Russia’s ongoing interference in Ukraine. Russia's decision to recognize passports issued by separatists in Ukraine's Luhansk and Donetsk regions was another direct challenge to the efforts to bring peace to eastern Ukraine," the US diplomat said.

She stressed that, “The United States and the EU remain united in this approach (regarding the condemnation of Russian aggression in Ukraine), and will keep sanctions in place until Moscow fully honors its Minsk commitments.”

The day before, the U.S. Vice-President said that Russia is responsible for the conflict in eastern Ukraine.