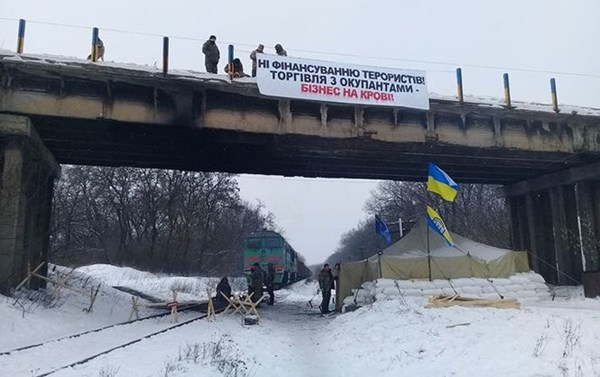 Participants of the railway blockade in the Luhansk region said they will turn to alternative tactics if they are dispersed, Ukrainskaya Pravda reported.

"Volunteers’ information about the reassignment of special units towards Bohdan Redoubt for the violent dispersal of Veterans of the War of Independence has been pre-confirmed,” reported the "staff of trade blockade" on Facebook.

"The staff of trade blockade says that in case of scenario of violent dispersal of protesters, it will have to resort to the guerrilla methods of struggle against the Russian occupation and physical destruction of roads, through which financing of terrorism and bloody trafficking is performed," the statement says.

One of organizers of the blockade, Anatoly Vynorohodsky told Hromadske Radio, "If the security forces receive a command to physically punish the peaceful protesters, the staff will be forced to use more radical methods of imposing the blockade."

"The measures will be adequate. We have come to the point when our country needs protection. We warn you that the people now here are not the entirety of the forces that currently in the Luhansk and Donetsk regions, so a conventional clean-up of a single roadblock will be a signal for the outbreak of hostilities. We will extend the guerrilla movement over the territory of both occupied and unoccupied parts of Ukraine,” he said.

People’s Deputy Volodymyr Parasyuk, who participates in the blockade, stated on 112 Ukraine radio that an attempt to disperse the action would become the armed forces’ most fatal mistake.

"Let them try, but it will be their most fatal mistake in this situation. I would not advise the heads of the security forces to do such things because here are trained men who are able to defend themselves,” Parasyuk stressed.

He also expressed his belief that the whole of Ukraine would support the blockade because everyone is sick of the war. "We will be here until the end. We will mobilize now; we will blockade other railroad lines, too. And not only railroad, but automotive smuggling performed with the help of trucks as well," the deputy said.

He also suggested that another checkpoint may be blocked on Monday or Tuesday. The railroad in Luhansk region was blocked on January 25 in protest against the trade with invaders.

The police filed a case against the blocking of the railroad between Svetlanovo and Shypylove stations in Luhansk region by the people in camouflage clothing, including MPs, according to Article 279 Part 1 of the Criminal Code of Ukraine.

The blocking of transport communications, which disrupts the work of transport, poses a danger to human life or results in other serious consequences. By law, such actions are punishable by a fine of up to 50 non-taxable minimums, or by correctional labor for up to 2 years, or by arrest for up to 6 months, or by imprisonment for up to 3 years.