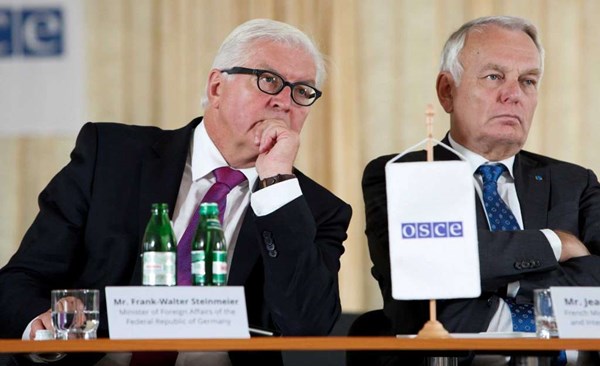 Attempts made by the German and French foreign ministers to revive the Minsk Agreements in Moscow and the Donbas have caused a sharp reaction from Ukrainian politicians and experts. The foreign ministers discussed this issue during their visit to Kiev. Ukraine does not believe that Europe has the ability to ensure a ceasefire in the Donbas. They also do not agree with the ministers’ proposal on the procedure for the fulfillment of the Minsk Agreements, Deutsche Welle reported.

Set against a backdrop a bridge destroyed in heavy fighting in Kramatorsk, German Foreign Minister Frank-Walter Steinmeier expressed his hope that the ceasefire in the Donbas will become sustainable. “The weapons have been silent since midnight. We now have to work hard to make the ceasefire permanent”, he said.

On the previous day while in Kyiv, his French counterpart, Jean-Marc Ayrault, said that they have brought Moscow a promise of a week-long ceasefire in the the Donbas starting on the 15th of September. This was previously reported by the leaders of the so-called Donetsk People’s Republic (DPR) and the Luhansk People’s Republic (LPR).

During an interview with DW, the Deputy Chairman of the Block of Petro Poroshenko pro-presidential faction of the Verkhovna Rada, Vadim Denisenko, advised the public to consider the visit and the statements of the European ministers solely in the context of election campaigns in both countries. “I think that Steinmeier himself understands that none of the militants are going to seriously abide by the truce, especially after today’s announcement by Moscow that the Kremlin has disavowed Steinmeier’s words,” Denisenko said.

Denisenko was referring to the words of the press secretary of the President of Russia, Dmitry Peskov. He said that “Moscow is not party to the conflict” and that it “cannot declare a ceasefire”. According to Peskov, on one side of the boundary line are the Armed Forces of Ukraine and on the other side there are the armed forces of the Donbas and that “that is the militia”.

On the previous day, the Ukrainian Minister of Foreign Affairs, Pavlo Klimkin, called the Kremlin’s position “a comedic approach”. He went on to say that “what is happening in the Donbas is exclusively as a result of the actions of Russia”.

Before the trip to the Donbas, Ayrault said that once the firing stops, the withdrawal of troops “in the three pilot areas” should happen. The Ukrainian parliament should also adopt a law on the elections and on the special status of the Donbas. According to the first diplomat of France, this will create the political conditions for the new summit in the Normandy format, and will also revitalize the implementation of the Minsk Agreements.

Mustafa Nayyem, a deputy of the Ukrainian parliament who is known for his criticism of the government, posted on his Facebook page that a mere ceasefire is not enough for Ukraine to implement its part of the Minsk Agreements. He compared Ayrault's conditions with those of a passerby’s inaction when a felony is being carried out before their eyes. “It’s basically the same as a passerby responding to the cries for help from a victim of violence by saying that the victim should stop resisting and should listen to the demands of the rapist just because he has stopped beating the victim with an iron pipe over the head,” he posted.

The first deputy chairman of the Verkhovna Rada and the Ukrainian representative in the humanitarian subgroup of the Trilateral Contact Group in Minsk, Iryna Herashchenko, proposed via Facebook that the European ministers should see “not only the image of the Donbas that was recovered and reconstructed by Ukrainian authorities, but also the images closer to the front line in places of heavy conflict such as Shirokino and Avdiivka. It would then be interesting to hear their opinions on how to hold elections in Shirokino, and whether or not they are ready to send German and French citizens there as observers”.

Ukrainian President Petro Poroshenko called on the German and French ministers not to recognize the legitimacy of the parliamentary elections that Moscow plans to hold on the territory of the annexed Crimea. The presidential press service reported that Poroshenko also thanked the OSCE and the EU for the intention not to send observers to these elections.

Steinmeier confirmed that Germany does not recognize the annexation of the Crimea and has criticized the election plans of the Russian Duma on the peninsula. However, both Steinmeier and Ayrault declined to answer the question of whether or not they will consider the Duma, which will include representatives from the Crimea, as legitimate.