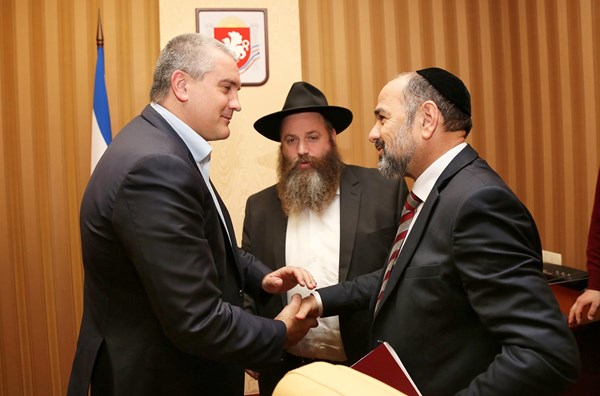 Ukraine may tighten its visa regulations for Israeli citizens due to an uncoordinated visit to occupied Crimea by the current Knesset member from the Shas party, who is also Israel’s former Minister of Religious Affairs, Ya'akov Margi.  The visit occurred on the 10th of February with the head of the occupation authority of the peninsula, Sergey Aksenov.

This was reported by the Ukrainian Ambassador to Israel, Gennady Nadolenko, in his comments to the Forum Daily news site, according to Interfax Ukraine.

“I have discussed the controversial visit of Ya'akov Margi with Kiev, as well as his meeting with the head of the occupying authorities of Crimea.  It is possible that after determining all of the details of the visit, deputy Margi will be entered into the black list with a ban on entry into Ukraine.  I want it to be noted that while discussing this topic, Kiev had voiced an opinion that Ukraine should introduce various forms of visas for religious pilgrims flying from Israel to Uman.  This is as a reaction to the violation of Ukrainian law by deputy Ya'akov Margi," Nadolenko said.

He added that on behalf of the Embassy of Ukraine, letters of protest were sent to the Israeli Foreign Ministry and to the head of Shas, Minister Aryeh Deri.  These letters drew attention to the inadmissibility of such visits to occupied Crimea.

The Verkhovna Rada deputy, who is also the Parliamentary Commissioner for monitoring the illegal crossing of the border with occupied Crimea, George Logvinsky, had said that if it is determined that Margi did not ask permission to enter Ukraine, and also held official meetings with supporters of Russia’s annexation of Crimea, he could face a ban on entry into Ukraine.  Also, according to Logvinsky, a criminal case could be opened against Margi that could lead to imprisonment of up to eight years.

“Margi is not the first MP who happened to be in such a situation. Criminal cases were opened against four French deputies who took part in illegal visits to Crimea.  They face up to eight years in prison.  This issue was discussed in the Parliamentary Assembly of the Council of Europe (PACE).  The resolution was that deputies’ immunity does not apply to entry into the temporarily occupied territory of Crimea.  We have opened criminal investigations against these French deputies, as well as German deputies, Polish deputies and personally against Silvio Berlusconi," Logvinsky stated.

According to Forum Daily, a senior official in Kiev has said that the Security Service of Ukraine (SSU) has already begun an investigation into the circumstances of the visit of deputy Ya'akov Margi.

“The SSU is especially interested in the fact that the organizers of this meeting in Crimea were brothers.  Benjamin and Schneur-Zalman Wolf are both rabbis in Odessa and Kherson.  Those cities are situated near Crimea.  The SSU will question the Wolf brothers.  As a result, this trip of deputy Margi’s could create problems for other Jewish communities,” the official said.

According to Apostrophe, the Ukrainian Embassy in Israel has previously warned Israeli citizens about traveling to occupied Crimea.