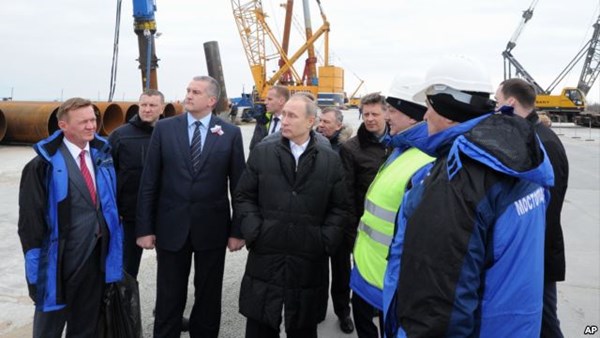 The head of the Central Election Commission of the Crimean Tatars, Zahir Semdlyaev, believes that the purpose of Russian President Vladimir Putin’s visit to the Crimea on March 18th was to “soothe the Crimean people who live in poor socio-economic conditions.”

"He arrived to promise, to reassure local residents a little, to say that we must still be patient for about another hundred years, and then everything will be fine for sure. But in any case, they [the officials] are fine now, and about the Crimeans – I do not know. It is not clear who is fine now except Aksyonov [Russian head of Crimea]," Smedlyaev told Krym.Realii.

Crimean authorities, under the control of Moscow, displayed a positive attitude towards Putin's visit and called it a symbolical event. The Vice Speaker of the Russian Parliament of Crimea, Konstantin Baharev, told Krym.Realii that Putin's visit demonstrates the heightened attention of the President to the needs of the Crimea and its inhabitants.

"The fact that he plans to take part in... [the construction of] the Kerch Bridge is especially important for us. Because we are all very much looking forward to this bridge, because it will help to solve many problems associated with the socio-economic development of the republic,” Baharev said

On March 18th, Putin arrived in Crimea to inspect the progress of the bridge’s construction, which will connect the peninsula to Russia. According to information supplied by the Kremlin, he flew by helicopter over the construction site, and held a meeting on the socio-economic development of the Crimea.

On Friday, the Ministry of Foreign Affairs of Ukraine issued a statement protesting Putin’s visit to the Peninsula.