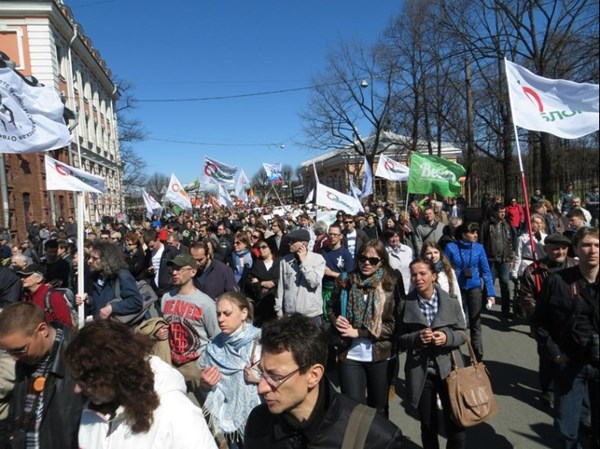 City authorities in Moscow have rejected an application submitted by the liberal Yabloko party to hold a public rally to call for the removal of Ramzan Kadyrov, the head of the Chechen Republic.

Radio Free Europe reported that Yabloko instead plans to hold a rotating one-person picket on January 26th in front of President Putin’s administration building, as public demonstrations in Russia of more than one person must be approved by the authorities. Russian opposition groups report that it is becoming increasingly difficult to obtain the permits required to hold assemblies that are in any way critical of the government’s policies.

“On 26 January, the Moscow branch of the Yabloko party will hold one-person pickets for the dismissal of Ramzan Kadyrov, head of the administration of Chechnya. The action will take place by the Presidential Administration. The authorities of the Central Administrative District of Moscow refused to give a permission to Yabloko to hold a mass picket by the office of Representation of the Republic of Chechnya,” the party’s press release stated.

The proposed demonstration comes in the wake of Friday’s rally in support of Kadyrov and Putin in the Chechen capital of Grozny, in which tens of thousands of people attended. It has been reported that Chechen officials and government employees were ordered to attend the rally.

Ramzan Kadyrov has been widely accused of corruption and human rights abuses. Earlier this month, he made headlines after stating that members of the non-systemic Russian opposition were “traitors” and should be tried for treason. Last week, he further elaborated his views in a diatribe published in Izvestia in which he called for a further crackdown on the “jackals” and “enemies of the people” who are opposed to President Putin.

Sergei Mitrokhin, Chair of Yabloko's Moscow branch, stated “the Russian opposition must respond to the boorish threats [made by Kadyrov]... At our picket we will demand an apology from Kadyrov and the dismissal of Kadyrov from the post of the head of Chechnya from Putin.”