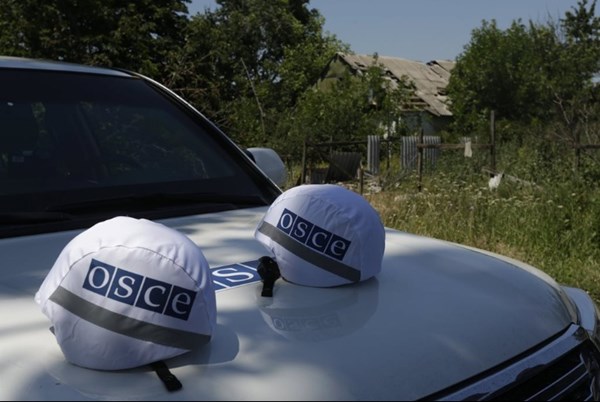 The OSCE Special Monitoring Mission (SMM) came under fire on Sunday near the village of Kominternovo. 3.5 kilometers west of the village, six SMM members were investigating three craters when they heard three single shots of small arms fire from about 150 meters away.

According to an OSCE report, “the SMM left the area immediately. On its way to its vehicles, the SMM heard a burst of small-arms fire originating from the same location.” None of the observers were injured in the incident.

The monitoring mission was in an area controlled by the so-called Donetsk People’s Republic (DPR) and was escorted by armed militants of the break-away region as well as a Russian Federation Representative of the Joint Center for Control and Coordination  and a media representative.

The pro-Russian website DAN reported that Eduard Basurin, Defense Spokesman of the Donetsk People’s Republic, together with representatives of the OSCE were attacked by the Ukrainian military. "We just came under sniper fire from the Armed Forces of Ukraine in Kominternovo. We went there to investigate the shelling, which occurred on December 24th," Basurin said.

While the Russian and separatist media have blamed the attacks on the Ukrainian Armed Forces, an ATO report issued on Saturday warned of a possible provocation by DPR militants in the area around Kominternovo.

"The militants are preparing a provocation for Russian journalists, representatives of the OSCE Special Monitoring Mission and the Joint Center for Control and Coordination to discredit the Armed Forces of Ukraine," the statement reads.

Facing accusations that the ATO was responsible for Sunday's incident, ATO Representative Alexey Mazepa assured reporters that the Ukrainian Army follows the ceasefire agreement and has a strict policy of not firing until fired upon. "The Ukrainian military rarely opens fire even in response. Therefore, the statement that we were the first to open fire is untrue. That is out of the question," Mazepa said.

"We have warned that they were preparing such provocations. They are trying to discredit the Armed Forces of Ukraine in the eyes of international observers,” Mazepa claimed. “All these reports are just more lies that they use to try to distort the real situation on the front line. In the area of Kominternovo the ATO forces didn't fire a single shot," he stressed.

Kominternovo is located 23 kilometers northeast of the strategic city of Mariupol.