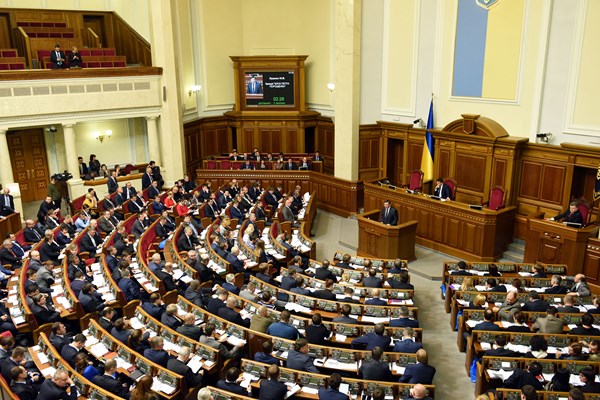 On Thursday, January 18, the Ukrainian Parliament (Verkhovna Rada) approved in the second reading and overall the draft law "On the specifics of the state policy on securing the state sovereignty of Ukraine on the temporarily occupied territories of the Donetsk and Luhansk regions" submitted by President Poroshenko.

The law recognizes Russia as an aggressor state. At the same time, the deputies refused to support the proposal to denounce the Treaty on Friendship, Cooperation and Partnership with Russia and break diplomatic relations with it.

280 deputies voted in favor of the adoption of the law on the reintegration of the Donbas and Crimea; 226 votes were necessary for approval. The document denies any territorial rights of Russia regarding the Crimea and the Donbas and the “temporary occupation” of these territories are called “illegal”.

The Bill states that Moscow is accountable for moral and material damage to Ukraine and its citizens, and those who took part in the armed aggression or participated in the work of the "Russian occupation administration" were promised criminal liability.

However, the deputies refused to support the amendments suggesting that the military operations in the Donbas be called a “war.” Instead, the bill contains the term "measures to ensure state sovereignty" over the territories that are currently not controlled by Kyiv. Parliament used this wording to replace the earlier term "Anti-Terrorist Operation" or ATO.

The document gives the president of Ukraine expanded powers to create a joint headquarters of the armed forces and security agencies for conducting military operations in the region.

During the discussion of the bill in the Verkhovna Rada, which began in October 2017, references to the Minsk agreements were excluded from its text. Ivan Vynnyk, Secretary of the Committee on National Security and Defense, who presented the document explained this by the "difference in nature" of those agreements and of the laws of Ukraine.

"We cannot implement in Ukrainian legislation diplomatic, political acts that tend to change depending on the negotiation process. Besides, the Minsk agreements have not been ratified by the Verkhovna Rada," Vynnyk said.

During the first reading of the bill, in the beginning of October last year, clashes between deputies occurred in the Rada. The opposition blocked the parliamentary rostrum and some of its representatives threw smoke bombs at the presidium. This time everything went quietly, although the discussions were acute as more than 670 amendments were discussed, most of which were rejected by the ruling majority.

Deputies from the factions of the Petro Poroshenko Bloc (BPP) and the People's Front party confessed to each other in private that they "received an assignment from above" to keep the main provisions of the presidential version of the bill at any cost. "We can allow only cosmetic changes, but in no way, shall the expansion of the president's powers be touched," DW reports, quoting one the deputies who spoke on condition of anonymity.

Only the Opposition Block faction, which consists of the former members of the Party of Regions that ruled during the presidency of Viktor Yanukovych, spoke out categorically against the adoption of the document.

"Ukraine will now find itself in international isolation. The whole world said there is no alternative to the Minsk agreements, however, those MPs who wanted to adopt this bill actually spat at Germany, France and the US, having withdrawn the mention of the Minsk agreements," said the deputy from the Opposition block, Mikhailo Papiev, as quoted by DW.

In contrast to him, representatives of the factions Samopomich (Self-Relience), Batkivshchyna (Fatherland) and the Radical Party of Ukraine calling themselves patriotic opposition supported the bill, provided it introduced more stringent language and provisions.

Thus, the non-factional deputy Andriy Ilyenko demanded to withdraw from it the right of the Cabinet to control the movement of goods and humanitarian aid between the territories under the control of the separatists and the rest of Ukraine.

Oleh Bereziuk, the head of the Samopomich faction demanded a clear definition of the date of the beginning of occupation and the narrowing of the President's right to manage the law enforcement structures and armed forces of Ukraine in the conflict zone without the consent of the parliament.

Other opposition deputies unsuccessfully tried to supplement the bill with provisions on the more severe responsibility of Ukrainian citizens who took the side of the separatists. They also demanded that the Crimea be mentioned not only in the preamble but also in other articles, and that they unequivocally determine the date of the beginning of Russian aggression against Ukraine.

However, the deputies from the parliamentary majority answered that this law is a framework law and requires the introduction of detailed amendments to other normative acts of Ukraine.

The Chairman of the Verkhovna Rada, Andriy Parubiy said that the adoption of the law on the reintegration of the Donbas and the Crimea was a victory. According to him, the US and the EU, Ukraine’s strategic partners "positively perceive this law. The Russian Federation, as could be seen on TV channels, was simply furious with the adoption."

In turn, President Poroshenko called the law "a signal" for the part of the Donbas that is not under Kyiv's control. "We will continue to pave the way for the reintegration of the occupied Ukrainian lands by political and diplomatic means," Poroshenko wrote on his Facebook page.