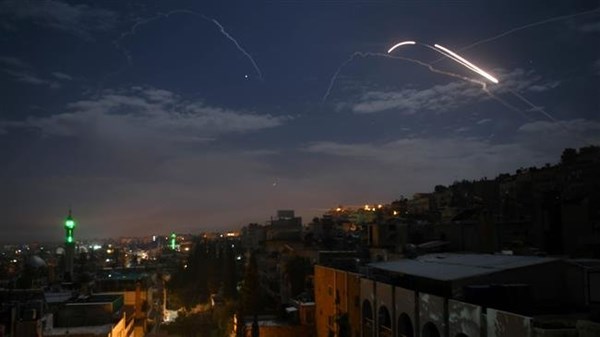 On the night of 20 January, the Israeli military launched another missile strike against targets in Syria. The attack targeted Iranian weapons depots, an intelligence facility, a training camp, and Syrian aerial defense batteries. The Israel Defense Force (IDF) stressed that the attack was a response to a surface-to-surface missile attack launched from Syria against Israel’s Golan Heights.

“These are the Iranian Quds military sites in Syria that we targeted in response: munition storage sites, a military site located in the Damascus International Airport, an Iranian intelligence site and an Iranian military training camp,” the IDF tweeted.

The IDF also published a video on Twitter of the Syrian aerial defense batteries being attacked, one of which was presumably a modern Russian-made Pantsir system.

“On Sunday, Iranian Quds Forces operating in Syria launched a surface-to-surface rocket from Syria aimed at Israel’s Golan Heights. The Iron Dome Aerial Defense System intercepted the rocket. In response to this attack, during the night, Israeli fighters attacked Al-Quds targets in Syria, as well as Syrian aerial defense batteries which opened fire on them,” the IDF said.

Israel’s previous attack against Syria took place during the day on 20 January. Syrian aerial defense forces claim to have repelled a missile attack by four Israeli F-16s on the Syrian International Airport in south-eastern Damascus. Pantsir and Buk crews shot down seven missiles fired by the Israeli pilots from over the Mediterranean Sea, according to a report by Russia’s National Defense Management Center.

Israel also attacked Syria on 26 December 2018. According to media reports, the IDF launched a missile strike against military targets close to Damascus. Some of the missiles were intercepted by Syrian aerial defense systems, but a munitions depot was destroyed and three Syrian soldiers were injured. The Syrian military says that the attack was launched from Lebanon. Israel claims to have repelled the anti-air missiles fired by Syria.