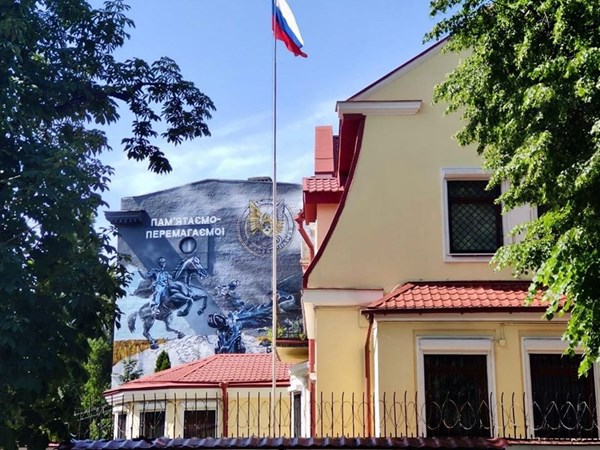 Billboards with the coat of arms of counterintelligence of the Ukrainian Security Service (SBU) have been installed near the Russian Embassy in Kyiv and consulates in Odesa and Lviv. In Kharkiv, a Ukrainian patriotic mural was placed on a building next to the Russian Consulate General.

“They were placed specifically for "Russia Day," which is celebrated on June 12,” the SBU said on its Facebook page said.

"Special greetings from SBU on the so-called Day of the Russian Federation," the SBU’s statement reads.

Ukrainian Journalist Andriy Tsaplienko wrote on his Telegram channel that now, on Vozduhoflotsky Avenue in Kyiv, in front of the Russian Embassy there is a billboard with the image of an eagle clutching a two-headed viper - a symbol of the Ukrainian counterintelligence.

"Greetings with a transparent hint, given that Russian diplomatic institutions are a legal "roof" for FSB and GRU agents," the journalist said.

Russia Day called Day of adoption of the declaration of state sovereignty of RSFSR before 2002, is the national holiday of the Russian Federation. It has been celebrated annually on 12 June since 1992. It is the successor to October Revolution Day, the former national day in the Soviet Union.