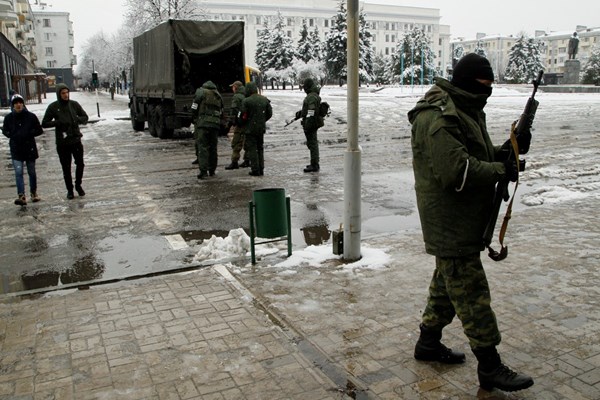 According to Novaya Gazeta, Vitaly Podobry and LPR military prosecutor Sergey Razno were detained, the rest were dismissed. PGO investigator Leonid Tkachenko was arrested the day before.

The PGO staff were arrested after so-called LPR Interior Minister Igor Kornet advised LPR head Igor Plotnitsky to hand over to him the chief prosecutor, military prosecutor, and their deputies.

However, Plotnitsky refused to hand over Irina Teytsman, chief of the LPR administration, Yevgeny Seliverstov, head of LPR Interior Ministry state security service, and Anastasia Shurkaeva, head of GTRK LPR, all of whom Kornet accused of carrying out sabotage and reconnaissance activities on behalf of Ukraine.

The soldiers blocking off the streets in the center of Luhansk were reportedly unable to find their way around the city, not knowing addresses or street names. The locals considered them to have an accent, and thus believe them to be DPR militants, or forces from the periphery. Movement through the territory is now subject to passport control, although bags are not being searched.

Kornet, in turn, said that he does not intend to leave his post and, with the help of armed persons, he seized the administrative center of Luhansk on November 21. He also announced the arrest of “high-ranking representatives of government organs”.
It came out later that Moscow had supported the LPR Interior Minister in his conflict with Plotnitsky.

On the evening of November 21, a large convoy of military equipment arrived in Luhansk.

On the morning of November 22, a video was released on Plotnitsky’s website showing a meeting with the so-called LPR ministers. At the meeting, the head of the republic officially accused Kornet of attempting a coup d'état.