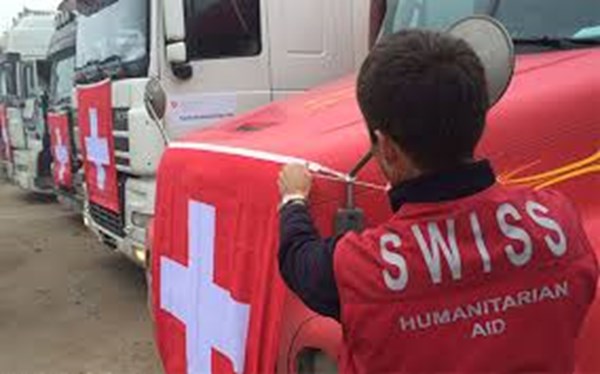 Two convoys with medicine and materials for water purification were delivered from Switzerland to the east of Ukraine, as announced by the Swiss government.

As the government explained, a train carrying supplies for water treatment went from Switzerland to Donetsk on Sunday morning.

"The goods are intended for water pumping stations in the Donbas region which provide drinking water to the population on both sides of the line of contact," the message states. In addition, medical supplies, in particular, replacement parts for radiology equipment were sent via road transport to the Donetsk region.

A second convoy, consisting of 14 trucks, delivered 245 tons of supplies for the water pumping stations in the city of Krasnoarmeysk, which is under the control of Kiev. The medicines have been delivered to a hospital in Kurakhovo. The convoys were accompanied by seven Swiss representatives of the Directorate for Development and Cooperation (DRS), Humanitarian Aid Corps and the Swiss Embassy in Kyiv.

As emphasized in Bern, this was the fourth time aid has been provided to the Donbas region since the spring of last year. DRS is the only state structure that organizes humanitarian convoys that cross the line of contact in eastern Ukraine.

As previously reported, Switzerland will provide humanitarian assistance to Ukraine in 2015-2017 worth approximately $100 million.