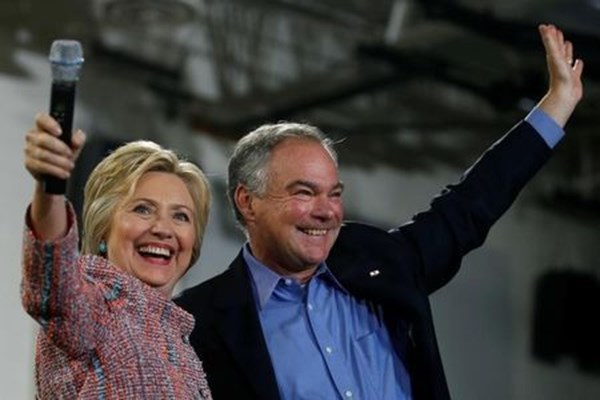 Hillary Clinton announced on Friday that her running mate would be Senator Tim Kaine from Virginia, an experienced political insider who sits on the Senate Armed Services and Foreign Relations Committees.

The move comes two days after Clinton’s rival Donald Trump made headlines by exclaiming at the Republic National Convention that, if elected President, the US wouldn’t necessarily come to the defense of NATO allies in the event of a Russian invasion.

Tim Kaine, on the other hand, applauded the recent announcement that NATO forces would be significantly strengthened in Eastern Europe to reassure the US’s partners who are most vulnerable to Russian foreign policy.

Moreover, Kaine has continuously stressed the importance of affirming US support for Ukraine on its path towards becoming a democratic and sovereign state.

Prior to the NATO Summit in Warsaw, Kaine, along with several other members of the Senate Armed Services and Foreign Relations Committees, sent US President Barack Obama a letter urging him to reaffirm the US’s commitment to deterring Russian aggression in Ukraine and elsewhere in Eastern Europe.

“Ukraine has faced an unprecedented set of challenges while attempting to shake off decades of endemic corruption and mismanagement.  Not only has it pursued long-neglected reforms, but it has had to do so while fighting a costly and ongoing war with Russian-backed separatists.  Yet, despite these significant challenges, Ukrainians have taken historic steps to reform their economic, political, and judicial systems… Unquestionably it is in American and European interests to see a peaceful democratic Ukraine succeed,” the Senators wrote.

“At the same time, Russian President Vladimir Putin has not only ignored key terms of the Minsk Agreement, but also continued to escalate the conflict and undermine decades of established international norms...[Russia’s] behavior is both reckless and deeply troubling. As such, we applaud your efforts to bolster NATO amid such Russian provocations. The announcement of a rotational deployment to Eastern Europe along with the tripling of the NATO Response Force helped reassure our NATO partners most vulnerable to Russia,” the letter concluded.

This position stands in stark contrast to Donald Trump’s, whose campaign team recently worked behind the scenes to “water down” the Republican Party’s national-security platform in regards to its support for Ukraine.

Trump has done little to hide his indifference towards Ukraine, saying in August of last year that he “wouldn’t care” if Ukraine joined NATO. When he travelled there in September, he told Ukrainians that their war is “really a problem that affects Europe a lot more than it affects us.”

Many political analysts have noted that the Trump campaign’s lack of foreign policy insight is one of its main weaknesses. By choosing Tim Kaine as her running mate, Hillary Clinton is attempting to highlight that weakness.