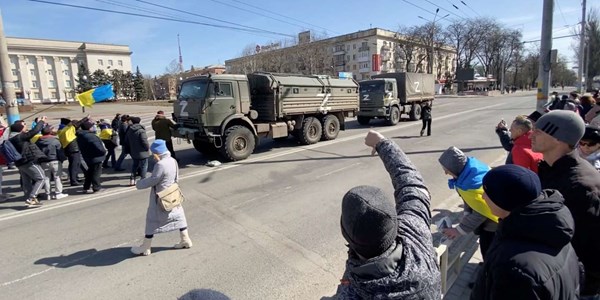 Ukraine’s General Directorate of Intelligence of the Ministry of Defense has warned that Russia is preparing to hold “pseudo-referendums” in the Kherson and Mykolaiv regions with the goal of declaring “people’s republics” and joining the Russian Federation, according to the Directorate’s Facebook page.

According to the social media post, Ukrainian intelligence found “in the occupied territory of the Kherson region, print ballots, forms, brochures, posters and flyers supporting a ‘referendum’ on the creation of the next pseudo-republic ‘KhPR’ [Kherson People’s Republic] and recognition of the occupying power.”

According to Ukrainian intelligence, Russia officials collected passport data when residents collected humanitarian aid. “In order to get food rations, residents had to fill out a questionnaire with personal information,” the post read. It is alleged that this information was then used to file fabricated ballots.

Likewise, Russia is accused of preparing a similar referendum in Snihurivka in the Mykolaiv region on joining the Crimea, which Russia annexed in 2014.