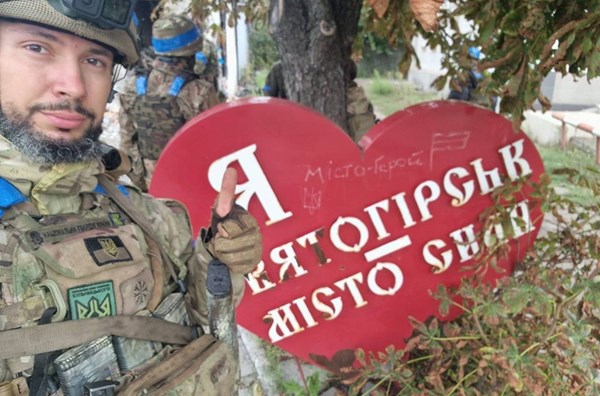 The city of Svyatohirsk in the Donetsk region came under the control of the Ukrainian Armed Forces. Ukrainian Telegram channels published a photo with the Ukrainian flag on the building of the Svyatohirsk City Council. There is no official confirmation from Ukrainian authorities of this information yet.

According to Russian blogger Andrei Morozov ("Fighting Cat Murz"), the Ukrainian military occupied a bridgehead on the left bank of the Siverskyi Donets River and moved to the rear of the Russian forces defending Lyman.

"The Armed Forces of Ukraine, just don't laugh, successfully crossed the Siverskyi Donets near Bilohorivka, flanking the positions of the 2nd Army Corps of the LPR, facing towards the Seversk-Artemovsk highway and the rear of the allied forces of Kuban Cossacks and Luhansk reservists, still heroically defending the forester's hut near Krasny Liman. At night, judging by the sounds, after a long break in Kherson and Slobozhanshchina, HIMARS worked again in Luhansk region, “ writes Morozov.

Earlier, the command of the Ukrainian Airborne Assault troops confirmed the liberation of Bohorodychne near Svyatohirsk .

Svyatohirsk 's city council is located on the left bank of the Siverskyi Donets, where Russian troops were reportedly going to create a new line of defense.

The Ukrainian Operational Command South reported that since the beginning of the offensive in the Kherson region in recent weeks, 13 settlements and 500 square kilometers of territory have been liberated. Among the liberated settlements are Vysokopillya, Novovoznesenske, Myroliubivka, Bilohirka and Sukhyi Stavok. Vysokopillya, Novovoznesenske and Myroliubivka are located near the border with Dnipropetrovsk region, Bilohirka and Sukhyi Stavok - near the border with Mykolaiv region.

The General Staff of Ukraine reported that the units of Russian troops on the northern bank of the Dnieper are negotiating the surrender of their positions and weapons. It is not known whether this is a local surrender or a total one.

The Ukrainian Armed Forces inflicted a major operational defeat on Russia, having won back almost the entire Kharkiv region in a rapid counteroffensive, according to a summary by the American Institute for the Study of War (ISW). During the six days of the offensive, Ukrainian troops eliminated the Izyum salient and ousted Russian units in the east beyond the banks of the Oskil River, and in the north - beyond the state border.

"The current counteroffensive will not end the war. Sooner or later, it will be over, and Russia will be able to build a defense - and even, possibly, start local counterattacks. The war is likely to last until 2023. However, Ukraine turned the tide of the conflict and took the initiative into its own hands. Now Kyiv can impose on Moscow the places and nature of the battles," the institute's report says.

Earlier it was reported that Ukraine regained control over the territories with an area of 3 thousand square meters. Km. This is more than Russia has seized since April. By the evening of September 11, at least 40 settlements of the Kharkiv region were liberated. The Ukrainian military reached the border with Russia.

Also on September 12, Russian troops shelled Kharkiv twice. Because of the shelling, the city lost light and water for several hours, the public transport stopped. At about 1 p.m., shells hit the Osnovyansky and Kyiv districts of the city, killing one and injuring six people, said the head of the Kharkiv regional administration, Oleh Sinegubov. Around five in the evening, the city was shelled a second time. The shells hit a densely populated area, near which there are no military facilities, said Kharkiv Mayor Igor Terekhov.

This is the third shelling in a day, on September 11 in the evening Russian troops shelled CHPP-5 - one of the largest power plants in Ukraine. Electricity was lost in several regions at once, four employees of the power plant were killed.

The counteroffensive launched by the Ukrainian Armed Forces in the Kharkiv direction is likely to move to the right bank of the Dnieper, to the Zaporizhzhia region, military expert, and colonel of the Ukrainian Armed Forces of Ukraine in reserve Roman Svitan suggested in an interview with The Insider. However, according to him, it is impossible to predict what tactics the Ukrainian troops will adhere to because the nature of their actions is too non-standard.