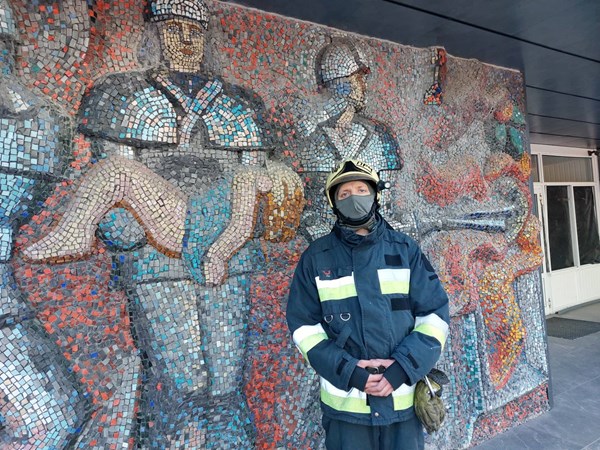 Andriy Evmenenko is a fire brigade commander in Chernihiv. As a child, Andriy would look at colorful photos of red fire engines in the family album. They were his father’s pictures from when he had served in the fire department in Moscow. Who would have thought that many years later, Andriy would be putting out fires, in his native Chernihiv. Fires started by Russian bombs and shells.

This is a story about a fireman, who has fought fires in the besieged city even after the water supply was destroyed.

“Before the Russian invasion, the most difficult fires for me were at the Vasilkiv oil depot in 2015 (Kyiv region. – Author) and in the forest in the Chernihiv region. But now, the hardest ones came during fighting in Chernihiv”, says Andriy.

Andriy was on vacation when the war began. In the morning his phone exploded with messages. “WARNING! Emergency!! The war has begun,” the message arrived via his work Viber chat. All personnel needed to return to the fire Department immediately.

“In the morning I heard explosions. So, I quickly took my wife and two children to a village near our city. They would be safer there. Then I headed off to work”, remembers the fireman.

From that day, Andriy Evmenenko lived in the fire station’s bunker and worked every other day.

Destruction and dead bodies in the streets of Chernihiv

The first fire he attended to was in the Ukrainian Security Service building on February 25. After that, a private house burned down on the outskirts of the city. Then there were the city hall, cinema, and an apartment building. The shelling became very frequent. There could be six fires in one shift. Soon we stopped counting them.

Andriy says that the most terrible call was to Chornovola street. On the afternoon of March 3, the Russians bombed this residential area, killing 49 civilians. Many of victims had been standing in line outside the pharmacy when the bombing began. 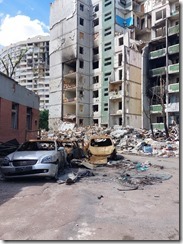 Chernihiv,Chornovola street where 49 people were killed

“My department evacuated people from the fifteen-story building on Chornovola street. The entrance had become jammed due to the explosion. Some people couldn't get out. We tried to help them. There was complete panic as people were looking frantically for their relatives. It was a horrific scene; people’s body parts were strewn around. The floors from the first to the fifth were absolutely destroyed. I was sent to work on the 13th floor. From here, I could see all the fires around my city, as Russians continued to bomb schools and oil depots. It was a terrible sight”, says Andriy.

Firefighters didn't wait for the end of the air raids. Sometimes they put out fires while the bombing was going on. The water pipes had been damaged by Russian bombing in the beginning of March. There was no water in fire hydrants. Putting out fires became extremely difficult. The firefighters had to take water from the river and water reservoirs. It was taking so much more time.

“One day, the Podusivka micro district came under Russian artillery fire. Many houses were burning. We arrived at the scene but couldn’t start working because of the shelling. We took shelter near a fence and were lying there for 10 minutes before we were able to start our work. Because of water shortage, when there were numerous calls, we didn’t completely put out fires. We just made sure there was no threat of explosions or fire spreading to neighboring buildings. After every third house, we had to go get more water”, explains Andriy.

We lost a firefighter who was killed by shell fragments. There were also two more victims among the fire station personnel.

“The hardest thing for me was watching children die,” says Andriy. Three children were killed when Russians bombed micro district ZAZ. Officially, 262 children have died in this war, 68 of them in the Chernihiv region. And this will not be the final number. 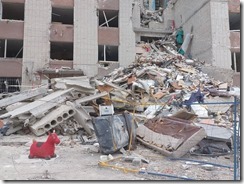 Andriy says the situation in the city is better now after Russia withdrew its troops from the Chernihiv region. Chernihiv is returning to a more or less normal life. Although the air raid sirens can still be heard every day in the city and Russians shell the border villages of the region from time to time.

The war is raging in the east of Ukraine now.