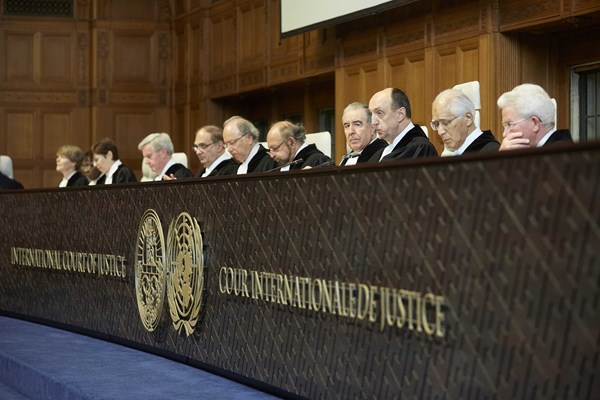 On June 12, Ukraine filed a written memorandum with the UN International Court of Justice in its case against Russia regarding Russia’s violations of the International Convention for the Suppression of the Financing of Terrorism and the UN Convention on the Elimination of All Forms of Racial Discrimination.

This was stated on the Facebook page of President Petro Poroshenko.

"It is very symbolic that the International Court of Justice selected June 12 - Russia Day - to file a Memorandum," Poroshenko said. He added that this is an “important stage in proving that the Russian Federation will bear responsibility for all its illegal actions."

“In order to do this, we need the position of the International Court of Justice, which will give an appropriate assessment of the actions of the Russian Federation and will not leave them the opportunity to hide from responsibility behind the next manipulations, shouting ‘it's not us’ and ‘we are not there’. The memorandum contains an extraordinary amount of evidence, as for the Court's case law. It is done so that nobody doubts that Russia has committed illegal actions and should bear responsibility for it. There is still a lot of work to bring the truth, but the truth is on our side and that's why we will advocate and defend it with all proper means,” he stated.
Foreign Affairs Minister Pavlo Klimkin said that the memorandum consists of 29 volumes and contains 17,500 pages, with a total weight of about 90 kg.

Russia must submit its counter-memorandum by July 12, 2019.

On April 19, 2017 the UN court issued an interim decision on the lawsuit of Ukraine against the Russian Federation. According to the judges, the evidence filed by Ukraine on the financing of terrorism by Russia was insufficient; therefore, the court denied Ukraine’s request for interim measures to address this portion of the claim.

At the same time, the Court decided to provide interim measures for another portion of the claim - discrimination against ethnic Ukrainians and Crimean Tatars in the temporarily occupied Crimea. In particular, the court ordered Russia to authorize the work of the Mejlis of the Crimean Tatar people and provide access to training in the Ukrainian language in the Crimea.

Both Russia and Ukraine have an obligation to avoid violating the Convention on Racial Discrimination. The court also demanded that all things necessary be done to settle the conflict in the Donbas peacefully.