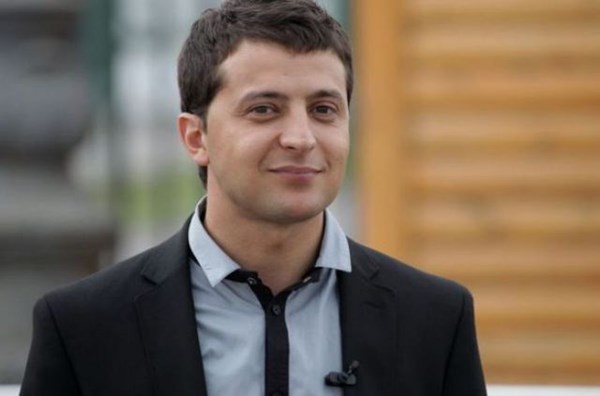 After announcing his candidacy on New Year’s Eve, Volodymyr Zelensky needed only three months to come first out of 40 other candidates in the first round of Ukraine’s presidential elections on 31 March. According to three authoritative sociological services, the results are unprecedented in Ukraine’s recent history. A comedian and political debutant, Zelensky received roughly 30.4% of the votes, whereas current president and candidate Petro Poroshenko came second with only 16.4%. Former prime minister Yulia Timeshenko came third with 13.1% of votes.

Zelensky, who was already leading in popularity, has now reinforced his lead, and could actually win in the second round on 21 April. The 41 year-old actor was in excellent spirits when he appeared at his election headquarters in Kyiv after the exit poll results had been announced. He smiled constantly and was cheerful with the press, but did not, however, rush to make any grandiose claims.

Petro Poroshenko was also full of smiles, despite losing to Zelensky, a slap in the face from his country. Speaking from his headquarters after election stations were closed, the 53 year-old incumbent president seemed like someone whose worst fears had not come to pass. Apparently he had been seriously concerned that he might not make the second round.

The candidate Yulia Tymoshenko told the press with a straight-face that she may refuse to recognize the election results. She called the exit polls “fake”, and cited her own data that would place her in second place with roughly 20% of the votes. 58 year-old Timoshenko’s response to the results evoked a sense of deja vu. After losing to Viktor Yanukovych by a mere 3% in the second round of the 2010 elections, she initially refused to acknowledge those election results, citing falsification of ballots. At the time, Tymoshenko said that she would fight the results in court, but would not convene another Maidan. How she will behave this time remains an open question. A group of sporty youths gathered outside the Central Election Commission on Sunday afternoon, but Tymoshenko distanced herself from them.

The primary outcome of this first round is that one third of Ukrainians are willing to experiment by electing a candidate from the show business who has spent the last 15 years making fun of the political elite. This culminated in the extremely popular series “Servant of the People”, in which Zelensky depicts a history teacher who becomes president. The series created considerable hype, especially among the youth in the east and south of Ukraine, and a desire to participate in the elections.

The popular Ukrainian TV channel 1+1, which belongs to the disgraced Ukrainian oligarch Ihor Kolomoyskyi, played a significant role in this. Although officially Zelensky is only connected to Kolomoyskyi through business ties, some speculate that they teamed together to stop Poroshenko from being reelected. In the days and weeks leading up to the elections, 1+1 has been screening Zelensky’s films and shows almost uninterruptedly, blending fiction with reality.

Another outcome of the results is that Poroshenko either underestimated his popularity, or decided to take a gamble by proceeding to the second round. The low turnout in western Ukraine, whose patriotism he was counting on, must have come as an unpleasant surprise. The widespread dissatisfaction with corruption and the low standard of living clearly outweighed the current president’s achievements in the foreign policy department – creating closer ties with the EU and facilitating the establishment of an Orthodox Church that is entirely independent of Russia.