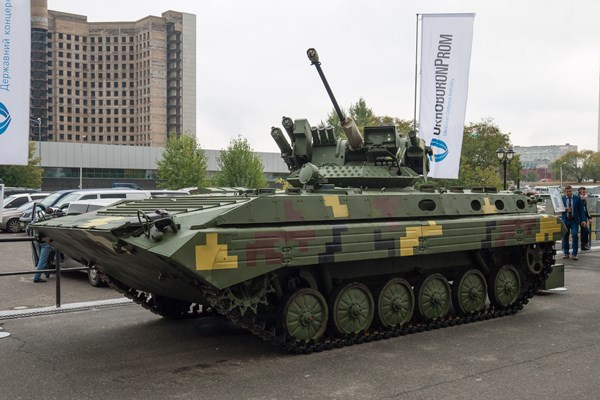 The Zhytomyr Armored Plant that is part of the Ukroboronprom state military industrial company has completed a full cycle of industrial testing for the new BMP-1UMD (infantry fighting vehicle - IFV).

The new armored fighting vehicle is a thoroughly revamped earlier version BMP-1, and is equipped with a modern combat module, a digital fire-control system, and powered by a German Deutz engine, according to information provided on the Ukroboronprom website.

The military enterprise states that the BMP-1UMD has completed all road performance, firing, and other tests and has confirmed its excellent characteristics that considerably expand the combat capabilities of the new fighting vehicle.

“Thanks to a new combat module, the Stilet, which is equipped with 30-millimeter automated cannon, 30-mm automated grenade launcher, 7.62-mm mortar, and high-precision Barrier anti-tank missile complex, the BMP-1UMD has super-strong fireproof characteristics. The weaponry arsenal mounted on the BMP-1UMD allows engaging and destroying not only manpower and light amour of the enemy, but also enemy tanks within a 5-km range. A Track-M sighting system in combination with a SVU-500-3TS weapon stabilizer ensure high precision fire,” the statement from the company said.

Designers of the revamped BMP-1UMD paid special attention to the protection of the vehicle’s crew. In addition to several auxiliary protective elements installed on the vehicle, there was a considerable amount of work done to disguise the BMP-1UMD from infrared tracking devices. Thanks to this, the BMP-1UMD is now considerably much less detectable by thermal imaging cameras.

The BMP-1UMD weighs 14 tons, only one ton heavier than a simple BMP-1. However, the German TCD 2013 L64V engine that replaced the old Soviet-era UTD-20 engine, tremendously improving the speed of the new fighting vehicle. The 4-stroke, 6-cylinder turbo-supercharged engine with electronic control unit has a 330 horsepower capacity with the ability to accelerate up to 390 hp, compared with the old UTD-20 engine that had only 300 hp. In addition, the German engine has a significantly greater service life which lowers its running costs, and also makes it quieter and consumes less fuel.

Once the new BMP-1UMD is off the conveyor and has completed industrial testing, it will be tested by the Ukrainian military before being fielded by the Armed Forces of Ukraine.

If tested by the military and fielded successfully, the BMP-1UMD will be launched into a serial production.

The BMP-1UMD was first demonstrated to the public last year at the Arms and Security-2016 international exhibition.