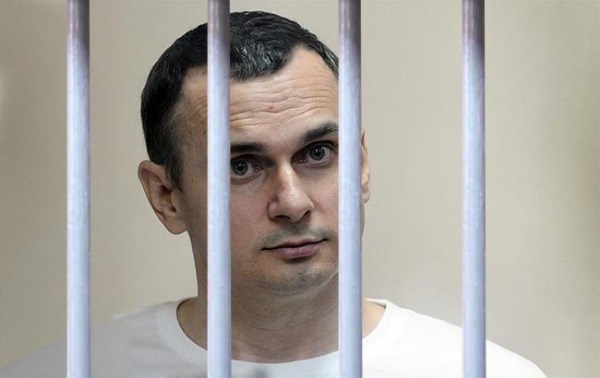 The Ukrainian filmmaker Oleh Sentsov, who is currently being imprisoned in Russia, has been awarded the “Sakharov Prize for Freedom of Thought”.

Sentsov is the first Ukrainian ever to receive this award, which is presented by European Parliament  for an outstanding contribution to the defense of human rights and basic freedoms. The presentation ceremony is scheduled to be held in Strasbourg on December 12.

According to Sentsov’s cousin Natalya Kaplan, Oleh has not yet found out about his victory. Either she or Sentsov’s attorney will inform him when they get the opportunity.

“I have not been invited to the award ceremony. Maybe they will wait for his release,” Kaplan noted.

“I am grateful to European Parliament for this important decision to present the prestigious Sakharov Award to the Ukrainian Oleh Sentsov. I am convinced that this decision will expedite the moment of Oleh Sentsov’s release,” Poroshenko wrote on Twitter.

“By ending Oleh Sentsov’s hunger strike, Russia hoped to put the brakes on this issue and to get rid of this emotional wave. But it has gotten another wave altogether: first a Polish award, and now such recognition as the Sakharov Prize 2018. Sentsov will become for Russia what Sakharov became for the USSR,” Klimkin wrote on Facebook.

The other finalists for the award included 11 NGOs which rescue migrants in the Mediterranean Sea, as well as the Moroccan oppositionist and activist Nasser Zefzafi, who is also currently in prison.

The €50,000 Sakharov Prize is named after the physicist, dissident and human rights activist Andrei Sakharov, and was established by European Parliament in 1988.