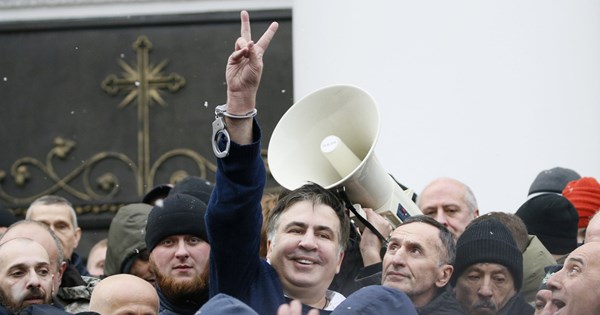 Former Georgian president and leader of the “Movement of New Forces” party Mikheil Saakashvili urged people to go out to a new Maidan in order to oust President Petro Poroshenko.

Speaking to his supporters after they had freed him from an SBU minibus, Saakashvili tried to discredit Poroshenko by saying that he is in collusion with certain oligarchs.

“I want to call on all citizens of Kyiv to go out into the streets, to meet on the Maidan today and to start the process of rescuing Ukraine from Poroshenko and his gang,” he said.

On the morning of December 5, the SBU came to arrest Saakashvili on suspicion of collaboration with the fugitive oligarch Serhiy Kurchenko.

He tried to escape arrest by climbing to the roof of his multi-storey home in Kostolna Street, near to Maidan Nezalezhnosti. An LB.ua correspondent witnessed him threatening to jump. Special forces reached the roof via the fire escape ladder and arrested him.

The special forces placed him in an SBU minibus and tried to take him to Volodymyrska Street for investigative measures, but the minibus’s passage was blocked by Saakashvili’s supporters. In the end, his supporters managed to extricate him from the vehicle.

Saakashvili has been charged according to Sec. 1 Art. 256 of the Criminal Code (collaborating with members of criminal groups), and more specifically of receiving money from Serhiy Kurchenko. The Prosecutor General’s Office of Ukraine (GPU) said that Saakashvili received $500,000 from fugitive oligarch Kurchenko to organize protests. The GPU also tweeted a recording of Saakashvili’s phone call with Kurchenko.