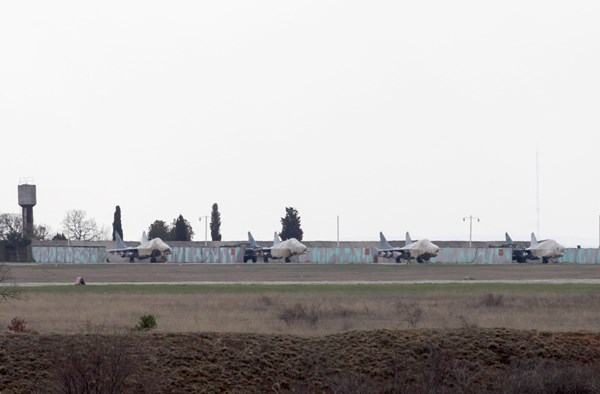 Russia has sent over a dozen Su-27 and Su-30 fighter jets to annexed Crimea to boost its air force on the peninsula, according to a witness, Reuters reported.

"More than a dozen SU-27 and SU-30 fighter jets which Russia is deploying to boost its air force, amid heightened tensions with Ukraine, arrived in the Crimea on Saturday,” the statement read. Reuters’s witness claimed to have seen the jets land at Belbek air base in the Crimea.

Meanwhile, the Russian news agency Interfax reported that Belbek airbase received its first combat aircraft after the reconstruction. "Two Su-30M2 fighter jets landed at Belbek air base where the reconstruction of the runway was completed,” the agency said. Viktor Sevostyanov, Commander of the Air Force and Air Defense Army of the Southern Military District arrived in the Crimea by one of the fighter jets.

Belbek is a co-location air base on which the 204th the tactical aviation brigade of the Ukrainian air forces had been located since 1990 and it is has also hosted some civilian flights. After Russia's annexation of the Crimea in 2014, Belbek air base catered solely to the Russian air force and civilian flights were halted. Two aviation regiments of the Russian Air Forces are now located on its base.

As the Crimean authorities stated, after the reconstruction, the runway can serve military and civilian planes and receive all types of aircraft, including heavy cargo aircraft.