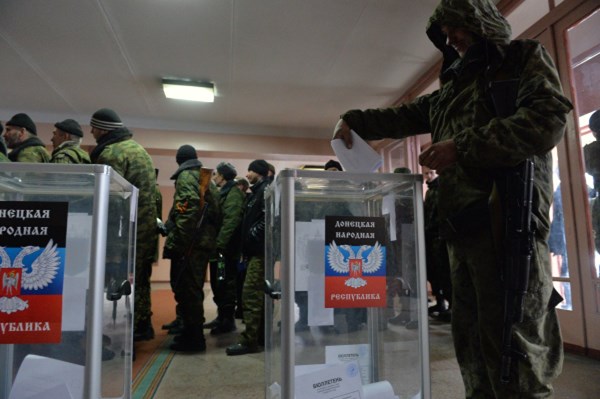 Russia has refused to call off the elections scheduled for November 11 in the occupied territories of Ukraine’s Donetsk and Luhansk provinces, said Oleksandr Motsyk, Ukraine’s representative to the Trilateral Contact Group (TCG).

According to the Ukrainian official, the likelihood that “elections” will be held in the DPR and LPR is at 99%.

“We could not persuade Russia to call off the “elections” it wants to hold in the occupied Donbas territories on November 11… We see that Russia is going to hold them. These elections are 99% likely to happen,” Motsyk commented.

“The 97th round of negotiations has taken place. The situation is nearly in a deadlock, and this is due to Russia’s stance,” the diplomat remarked, noting that Russia wants to “freeze” the conflict in the Donbas and is refusing to accept a diplomatic solution

Motsyk also said that Russia does not want to create a separate talk group for border issues.

After the assassination of DPR ringleader Alexandr Zakharchenko on August 31, the Russian occupation authorities scheduled elections for the leaders of the DPR and LPR and their so-called “people’s councils” for November 11.

Former Ukrainian President Leonid Kuchma, who previously represented his country at the TCG, said that the decision to hold “elections” in the Donbas is a threat to the peaceful resolution of the conflict. Ukraine’s Foreign Ministry believes that Russia’s decision justifies further sanctions against Russia. EU officials have also spoken against the elections.

US State Department Special Representative for Ukraine Kurt Volker urged Russia to call off the “elections” in the occupied territories. He emphasized that Ukraine is doing its part for peace in the Donbas, and that Russia should follow suit.