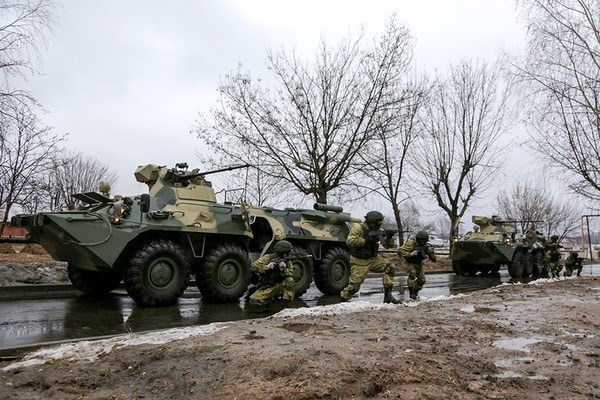 Russia is withdrawing some of the forces stationed near the border with Ukraine, amid Western demands for de-escalation, to begin negotiations on security guarantees with NATO and the United States.

More than 10,000 troops of the Southern Military District have been moved to places of their permanent deployment from training grounds, including in the annexed Crimea, Rostov and Volgograd regions, the press service of the Russian Defense Ministry reported on Saturday, December 25.

The order to withdraw troops was given amid the preparation of the first Russia-NATO Council in 2.5 years. As the Secretary General of the Alliance Jens Stoltberg said on Tuesday, the meeting could be held in early 2022.

NATO’s press service reported on Sunday that Stoltenberg proposed to convene a meeting of the Russia-NATO Council on January 12, when a planned session of the Alliance's Military Committee at the level of chiefs of staff will be held in Brussels.

Moscow has received the proposal of the North Atlantic Alliance and is considering it, the Russian Foreign Ministry told TASS on Sunday. According to Russian Deputy Foreign Minister Alexander Grushko, the timing, modalities, format and composition of the Russian delegation are now being worked out.

Last week, Bloomberg sources in the US administration estimated that 122 Russian troops were deployed to Ukrainian borders. According to American data, the number has increased by 20 thousand troops I n one week.

Reuters sources in Russia claim that Moscow is actively recruiting mercenaries who have previously fought in Ukraine and Syria in order to transfer them to the Donetsk and Luhansk People’s Republics and strengthen the forces of the self-proclaimed republics.

"It's a full house," said one of the agency's interlocutors. "Everybody who has combat experience is being recruited."

Russian President Vladimir Putin, during a large press conference on Thursday, again refused to give a direct "no" answer to the question of whether he was going to attack Ukraine. Putin called Ukraine possible accession to NATO a "red line".

"We're not threatening anyone. Have we come there, to the borders of the United States, or to the borders of Great Britain or somewhere? They came to us, and now they still say: no, now Ukraine will be in NATO," he said, adding that NATO "cheated" Russia by launching five waves of enlargement, and now must "immediately" give guarantees that this process will stop.

The day after the 5-hour telethon, Putin reported "flawless" tests of the Zircon hypersonic missile, one of six "miracle weapons" announced by presidents in 2018.

On Sunday, Kremlin spokesman Dmitry Peskov expressed hope that the missiles would help negotiate with NATO. "Let's hope the music becomes more convincing in this way," he said in an interview with the TV host, Vladimir Solovyov.