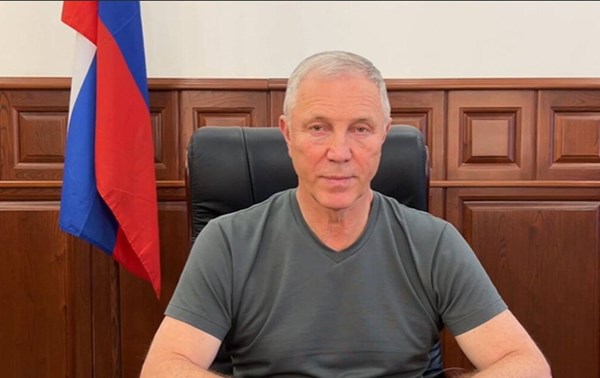 The head of the Russia-installed  Kherson regional administration, Vladimir Saldo, could have been poisoned by his cook and his housekeeper. Saldo has all the symptoms of poisoning, reports the Russian Telegram channel Baza, citing sources.

"It turned that the day before the alleged poisoning, a housekeeper who works at Saldo's house brought in a cook. Half an hour after the head of the military administration had a meal, he started getting confused, then his fingers began to go numb. A couple of hours later, he lost consciousness,” Baza writes.

According to Baza, local doctors made an electrocardiogram and a CT scan. They ruled out a heart attack or a stroke. Then, they took urine and blood for samples, sealed them and sent Saldo by plane to Crimea. There, Saldo was taken to the Semashko Hospital in Simferopol, where he was put into a medically induced coma. After some time, Saldo was taken to Moscow by special plane.

"Now he is in toxicological intensive care with a diagnosis of poisoning with an unknown substance. The test results will show what substance was used. The doctors will get the results within a few of days," Baza writes.

It’s unknown whether the cook and the housekeeper were detained and questioned, and whether there are other suspects.

At the same time, Saldo’s deputy, Kirill Stremousov, continues to deny Saldo’s poisoning and a medically induced coma. "There was no attempt to kill him. He is constantly under guard. Vladimir Vasilyevich is in a normal state. An older man. Five months non-stop under bullets and Grads. The man just overworked. The diagnosis is fatigue," Stremousov said.