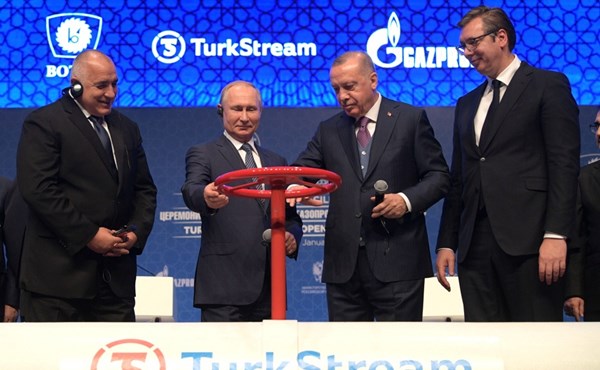 As he turned the symbolic valve, Putin put an end to the project which grew out of the wreckage of South Stream, and in which the Kremlin was hoping to see the long-awaited replacement of transit through Ukraine.

These hopes were in vain. Initially Gazprom was expecting a pipe with four lines, each with a capacity of 15.75 billion cubic meters (bcm) per year. One of them would be used to sell gas to Turkey, the other three for exporting to Europe.

On paper, the plan looked promising: Turkish Stream would use the already built infrastructure of South Stream – 2,500 km of pipe and 10 compressor stations, and 50 bcm of gas exports through Turkey would enable Gazprom to more than halve its transit through Ukraine (90 bcm per year).

However, Turkey announced in 2015 that it was interested in only a single line for its own needs, and did not wish to become a major transiter of Russian gas to the EU. It took a year of negotiations, a personal meeting between Erdogan and Putin in July 2016, and a 10% gas discount to convince Ankara to accept even one transit line.

When Gazprom was ready to resume construction, a key consumer withdrew from the project – Italy. In September 2016, Claudio Descalzi, CEO of the Italian corporation Eni, which was expected to become the receiving party of a gas pipeline through the Black Sea, announced that his company was not planning to take part in Turkish Stream, because the gas market had changed, and there was no longer any need to invest in the laying of pipelines.

Then the decision was made to extend the “stream” to Serbia and Romania through Bulgaria. Bulgaria already started receiving 20-25 million cubic meters of gas per day two days ahead of the opening ceremony, Interfax reports.

According to the Russian Energy Ministry, Turkish Stream cost $7 billion. But this is only the cost of laying the pipe on the bottom of the Black Sea, observes RusEnergy partner Mikhail Krutikhin: “In order to bring gas to the Black Sea, an absolutely new corridor was built in Russia from the Yamal peninsula. Several tens of billions of euros were spent on this, and this money is written off, because no benefit is derived from redirecting transit from Ukraine to Turkey.”

The total cost of the project is $20 billion, Sberbank CIB analyst Alex Fak estimated in 2018. According to his appraisal, Turkish Stream will not pay itself off in the next 50 years, and will bring Gazprom a loss of $13 billion.

Based on Gazprom’s own calculations, it will take 10-15 years for the construction of the underwater stretch of the pipe to pay itself off, but Krutikhin is adamant that “the money spent on the construction of the new gas corridor will never be recovered”. In order to extend the pipe to the gas hub in Austria, authorization will have to be received from the European regulators, and as for Turkey, it “has no need” for this gas.

“In 2019, Turkey halved its purchases of Russian gas, and has been increasing its imports of liquefied natural gas, and receiving new gas from Azerbaijan and from Iran. Russian gas has ended

up being a mere addition. Being the monopoly consumer, Turkey dictates its own terms both on gas prices and on its further transit to Europe,” Krutikhin explains.

The situation has been aggravated by the sharp decline of gas prices in Europe, analysts from Promsvyazbank note. When the South Gas Corridor was built, it was almost $400 per thousand cubic meters, but now at the largest gas hub, the TFF in the Netherlands, the spot prices at the end of 2019 were barely in excess of $120 per thousand cubic meters.

Contracts with delayed delivery are more expensive, but the cost of them also nearly halved last year. In the third quarter, Gazprom sold gas at an average of $169.8 per thousand cubic meters, the cheapest since 2004.

“Taking into account the plans to continue shale production in the US, and the introduction of new LNG capacity (in 2020, plants with a total capacity of 15 million tons are scheduled to be completed, of which the US accounts for 10.5 million), the market will retain a supply surplus next year too,” Promsvyazbank predicts.