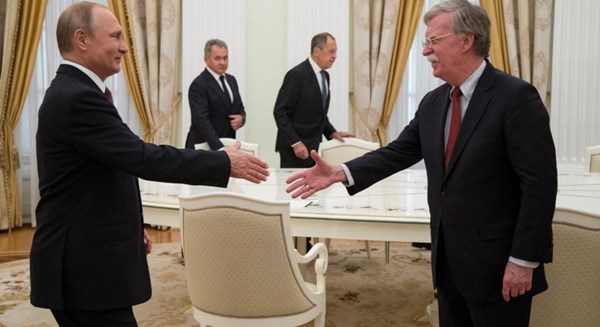 Russian President Vladimir Putin, at a meeting with U.S. President's National Security advisor John Bolton, said that Russian-American relations are in very poor condition and that one of the main reasons for this is political disagreements in the USA. According to Putin, Moscow has always tried to avoid aggravation of relations. Prior to his meeting with Putin, Bolton held closed talks with Russian Foreign Minister Sergey Lavrov.

"I regret to state that the Russian-American relations are not in the best shape. I have repeatedly talked about it publicly and say it again at the meeting with you [Bolton]. I believe that this is largely the result of a fierce domestic political struggle in the US... Russia has never been looking for confrontation, " Putin said, as quoted by Interfax.

The arrival of a high-ranking American official in Moscow, according to Putin, "gives hope" that Russia and the United States will be able to meet each other and restore relations.

At the closed meeting, Lavrov discussed with Bolton a range of problems related to Syria and Ukraine, TASS reports citing a source in the Russian MFA. The talks lasted about two hours. Even before Bolton arrived in Russia, some media reported that his main goal was to prepare for a future meeting between Presidents Putin and Trump.

Russian-American relations deteriorated against the backdrop of Russia’s annexation of the Crimea in February and March 2014.

Washington believes that Russia violated international law, interfering in domestic policy in Ukraine, and is also involved in the armed conflict in the Donbas.