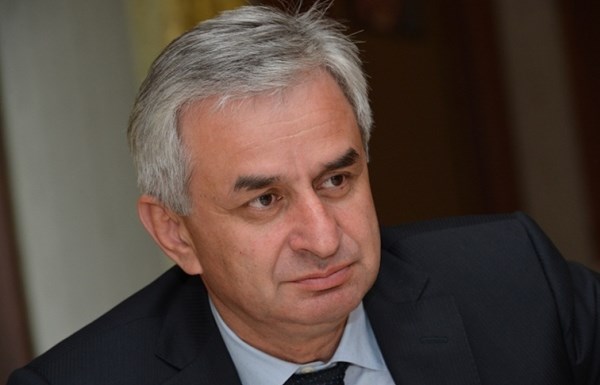 Raul Khajimba, the so-called “President” of Russia-occupied Abkhazia, a part of Georgia, has handed in his resignation.

“Yes, I’ve resigned,” Khajimba told Interfax on the evening of Sunday, January 12. He did not specify, however, whether he would be running in the snap “elections”.

The so-called “president” made his statement in the wake of mass protests and visits by senior Kremlin envoys to Sokhumi.

On January 12, Russian Presidential Aide Vladislav Surkov visited the capital of Abkhazia. Surkov oversees not only the occupied Georgian territories of Abkhazia and South Ossetia, but also the so-called Donetsk and Luhansk People’s Republics in Eastern Ukraine. According to the Kremlin, the purpose of Surkov’s visit was to “resolve the political crisis” in Abkhazia.

The day before that, Sokhumi was visited by Rashid Nurgaliev, deputy secretary of Russia’s Security Council, who organized and attended a meeting between Khajimba and members of the “opposition”.

Mass protests in Sokhumi began on January 8. The “opposition” said that Khajimba did not win the support of the majority of voters in the presidential pseudo-elections in September last year.

On January 9, protesters stormed the presidential palace. The assault was commanded by Akhra Avidzba, the same “Abkhaz” who in 2014-2016 headed the illegal armed group “Pyatnashka” which formed part of the DPR terrorist group. Pyatnashka consisted primarily of Abkhazian mercenaries and fought against the Ukrainian army. Members of the brigade committed crimes against the civilian population, tortured and killed hostages, robbed civilians, etc.

In light of the protests, Abkhazia’s so-called “parliament” demanded that Khajimba resign, and the “Supreme Court” ruled that snap “elections” would be held. The “president” described the decision as unlawful, accusing his opponents of attempting a “coup”, but changed his mind following Surkov’s visit.

The independence of the “Republic of Abkhazia” was declared in 1992 during the Georgian-Abkhazian conflict, in which Abkhazia was supported by Moscow. The Georgian constitution defines the territory as the Abkhazian Autonomous Republic.

The Kremlin recognized the “independence” of Abkhazia and South Ossetia on August 26, 2008, two weeks after signing a ceasefire treaty with Georgia through mediation by the US and international organizations. Russia undertook to withdraw its troops from Georgian territory by October 1, 2008, but did not keep its promise. In February 2018, the Kremlin included the illegal armed groups of South Ossetia in the Russian Armed Forces.

Apart from Russia, the pseudo-republics are recognized by Venezuela, Nicaragua, Nauru and Syria.