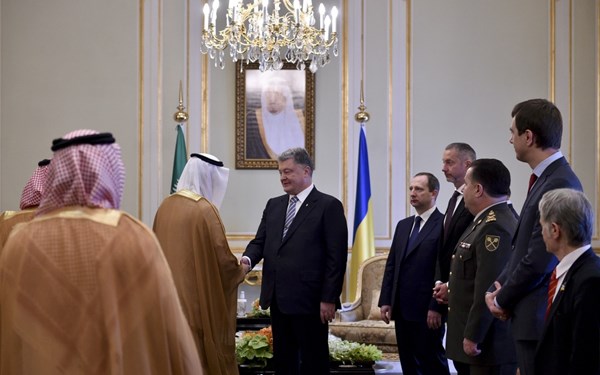 During his visit to the Kingdom of Saudi Arabia, President Petro Poroshenko met with the Secretary General of the Gulf Cooperation Council (GCC), Abdullatif bin Rashid Al Zayani, as indicated on the administration’s website.

According to the report, the both leaders discussed plans for the development of cooperation between Ukraine and the Arab Peninsula states.

During the meeting, Poroshenko introduced Mustafa Dzhemilev, a former Chairman of the Mejlis of the Crimean Tatar People, leader of Crimean Tatars, and a prominent public figure, and urged the GCC to take a more active position on protecting the rights of Crimean Tatars in the Russian-annexed Crimea.

The leaders also discussed vital questions from the ongoing politics and matters related to safety in the Middle East, including Qatar, Syria, and Yemen.

Poroshenko and the GCC General Secretary also discussed a recent terrorist attack in New York and stressed the need to step up measures to fight against terrorism that has no borders, in all its manifestations and forms.

In addition, the leaders signed a Memorandum of Understanding designating communication protocols between the Ministry of Internal Affairs of Ukraine and the GCC General Secretariat.

As it was previously reported, on October 25th, Russian authorities handed over the Deputies and Chairperson of the Crimean Tatar Mejlis, Ilmi Umerov and Ahtem Chiygoz, to Turkish authorities.

The freeing of Umerov and Chiygoz was facilitated by direct negotiations between the President of Turkey, Recep Tayyip Erdogan and Russian President Vladimir Putin following Erdogan’s visit to Ukraine.