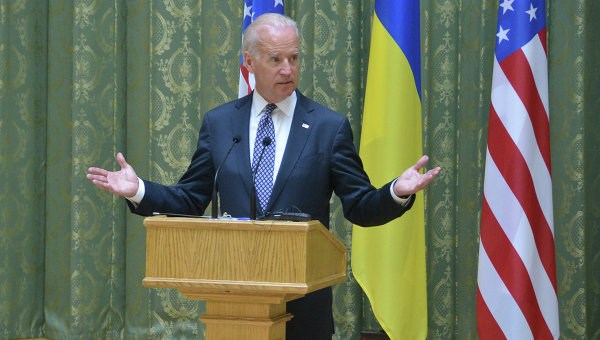 On December 7, The US Vice President, Joe Biden is expected in Ukraine. It’s the second time in the history of Ukraine since an American politician of such rank will address the Ukrainian Parliament. George Herbert Walker Bush, who addressed the Ukranian MPs from Verkhovna Rada’s podium, was the first. This happened when Ukraine expressed its intention to become an independent State. In his speech entitled “Chicken Kiev,” the former U.S President called on Ukraine to refrain from suicidal nationalism.
Biden’s visit to Ukraine is already being called historic. The New York Times collected expert opinions. MP of the Bloc of Petro Poroshenko fraction (BPP), Svitlana Zalishchuk, believes that Ukraine will hear both praise and also constructive criticism.
“Obviously, it is a visit of a high level, especially that it is taking place on the eve of the government reporting its past year’s accomplishments and the plans for the following year.
I think that it is an emphasized message from the American side as one of our main strategic partners. We need serious improvements in all directions. What has been done is good, but we can’t stop and slow down,” Zalishchuk said.
Many Ukrainian issues from funding to defence depend on the White House, which has important questions for Ukraine on a number of issues, for example, that of launching anti-corruption bodies. Zalischuk believes that Ukrainian leaders will certainly hear criticism from Biden. There will also be an acknowledgement of Ukrainian achievements this year. The Parliament adopted a lot of revolutionary laws, for which Ukraine has been waiting for ten years to implement, but results will be visible later, she explained.
“I think that only a small part of the assessments will be made public. We will see only the tip of the iceberg – fine-sounding diplomatic phrases. But, I’m sure that Biden’s arrival will be followed by a frank discussion of certain things in private,” Zalischuk said.
The former Ukrainian Minister of Foreign Affairs, Volodymyr Ohryzko, stated that visits of such level are extremely important on the political front, as they demonstrate that the most powerful states don’t forget about the victim of the Russian aggression. “Negotiations, which will be held with the President, the Prime Minister and the Chairman of the Ukrainian Parliament, Biden’s address to Parliament, and meetings with the public should be interpreted as an extremely important element of American political support for Ukraine,” he said.
“Political relevance is obvious. We are carrying out work, together with Americans, on the mobilization of the whole civilized world for the fight against Russian aggression. Ukraine isn’t likely to achieve success in this respect. This has to be admitted and highlighted,” Ohryzko said.
American influence on Ukraine is obvious and great, but the Ukrainian side has paid too much attention to Biden’s visit, Ukrainian political scientist and Director of the Centre for Applied Political Studies, Vladimir Fesenko, said. According to Fesenko, that shows that the society has insecurities.
According to Fesenko, one of the key moments of Biden’s visit is a further discussion of the Minsk agreements. The prospects of voting in favour of constitutional draft laws on decentralization reforms and how they will be implemented on key issues will also be placed on the agenda. A staffing matter is likely to be discussed, for example, the situation in the office of the Prosecutor General.
However, Biden’s arrival shouldn’t be considered as an arrival of an auditor, who will take any staffing decisions.
However, there is another thing worth mentioning. In recent days, there was a great probability that agreements about an establishment of a strategic alliance in the fight against Islamic terrorists, notably under UN auspices, between Russia and the US may have occurred. That is what Putin wanted to achieve. Fesenko said that the US was very close to it. According to him, this issue could be discussed at the climate summit in Paris.
The final decision on this issue hasn’t been taken yet, and the US took a cautious position and reservations about Russian offers, the Ukrainian political scientist said. In an assessment of Ukrainian problems in addition to the political situation of the country, Biden will rely on two essentially important positions. He will touch, on one hand, on maintaining of the political stability, and on the other hand, on the issue of improving the effectiveness, especially in the direction of anti-corruption reforms. Apparently, specific decisions will be developed during the political consultations.
Ohryzko believes that Ukraine is primarily in need of strengthening of the military sector. Ukraine needs a strong investment in the Ukrainian Army, further training and additional insights from the American Army, other armies of NATO members and also assistance in the modification of its army. Any, even the smallest corrupt practices in the Army, should be prevented and eliminated in order for the Ukrainian Army to be able to strike Russian aggressors to the point that it will make Russia think twice before continuing the aggression.
“If both parties direct their dialog on the above-stated topics, the results of Biden’s visit will be very positive. If we limit ourselves to solely expressing mutual love and support, I think, that it will have little effect on Russia,” summed up Ohryzko.
Joe Biden will arrive in Ukraine late Sunday night and stay there for two days. On Monday, he will hold a roundtable with the government officials and a public. Then, he will meet with the President, Petro Poroshenko, and the Prime Minister, Arseniy Yatsenyuk.